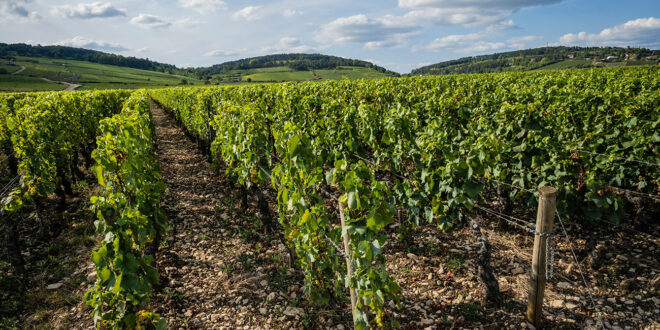 It’s expected the Burgundy 2022 harvest will be bigger than the region’s five-year average, France’s agriculture ministry said this month, also noting the healthy state of vineyards in the area.

Final figures on yields are not yet available, but suggestions the 2022 harvest could represent a rebound from the historically low 2021 crop could be welcome among wine lovers and producers alike.

This week, it was also announced that the 162nd Hospices de Beaune auction, co-hosted by Sotheby’s, will feature 802 barrels – or ‘pièces’ – drawn from 51 cuvées of 2022-vintage wines.

That’s up significantly on the 2021 auction, and it’s close to the record number of barrels offered in 2018, according to Maison Albert Bichot, which provides one of several routes for private collectors to purchase wines at the event.

A spokesperson for the Bourgogne Wine Board (BIVB) said more information on yields and vintage character would likely be available around the time of the Hospices auction, to be held on 20 November.

Yet the BIVB  recently said of harvest quality, ‘The potential is there to make 2022 a great vintage indeed.’

It added, ‘With beautiful balance, perfect health, and wonderful colour extraction, it would be unreasonable to ask for more.’

Some winemakers have expressed surprise at the balance displayed by young wines following the Burgundy 2022 harvest, despite a growing season marked by heatwaves and drought.

Erwan Faiveley, of Domaine Faiveley, said, ‘We are delighted about quality and happy about quantity, in both colours’.

While he said the Côtes de Nuits was looking terrific ‘as usual’, Côte de Beaune reds were looking ‘stupendously good’ at this stage.

In general, he said, ‘The levels of alcohol are low [to] very low, despite some high temperatures. The wines are wonderfully balanced and coloured.’

He said the balance of the young wines was a ‘big surprise’ considering the growing season conditions.

He highlighted ‘Les Grèves’ premier cru reds in Beaune as looking ‘superb’ at this early stage, with a ‘nice energy and very silky tannins’. For white wines, he said, ‘the Charlemagnes are impressive for their salinity and fullness on the palate.’

When asked about managing heat and drought conditions, Weber said, ‘It’s becoming increasingly challenging for the teams, we have to adapt our methods.’

He added, ‘Determining the right harvest date is becoming increasingly difficult and it is a very intense period. We need to be very responsive and flexible with our teams in order to pick at the right time, so as to preserve the freshness and avoid over-ripening – for every plot.’

He believes some methods helped vines to cope with heat this year, such as biodynamic practices and lighter ploughing of the soil to encourage water retention.

But he added, ‘It is important to remember that we were extremely lucky with the heavy rain at the end of June, which enabled the vines to get through the dry spell over the summer.

‘Without this rain, we would certainly have had major problems: in my opinion, this is the key to why this is such a promising vintage.’

Ludivine Griveau, winemaker and manager at the Hospices de Beaune wine estate, said earlier this month that the Domaine’s 60 hectares of vines were in their second year of organic conversion and had been in good shape since the start of the growing season, despite an April frost scare.

Flowering took place in perfect conditions and a lack of summer rain doesn’t appear to have been too detrimental. ‘We were afraid of drought, but the vines were ready to produce,’ she said.

Harvest was long by historical standards, beginning on 25 August in Pouilly-Fuissé and ending 16 September in St-Romain, she said. ‘It’s a delight to have…