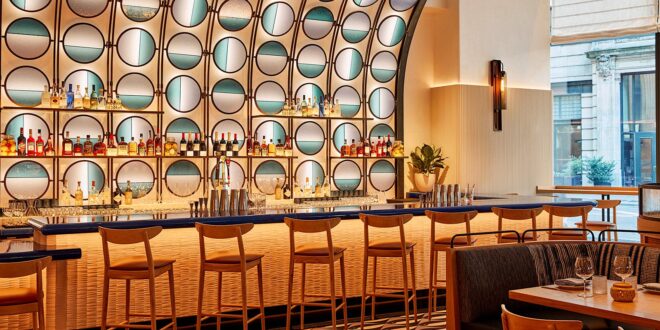 In 2002, long before José Andrés founded World Central Kitchen and became one of the world’s most recognizable and beloved chefs, he opened a Mediterranean restaurant in Washington, D.C., called Zaytinya. Now, Zaytinya has come to New York City, where it opened in July inside the new Ritz-Carlton New York, NoMad—one of several recent dining debuts in the Manhattan neighborhood.

Zaytinya, a play on zeytinya??, the Turkish word for olive oil, offers a meze menu inspired by Turkish, Greek and Lebanese cuisines. The small plates, meant to be shared, are familiar yet innovative: don’t miss the taramosalata, a cured carp roe spread, or the imam bayildi, an Ottoman-era meze of slow-cooked eggplant, onions and tomato. The seafood plates—including grilled octopus with yellow split pea purée and sea scallops with chilled corn tzatziki—are also standouts. For meat lovers, there are plenty of lamb, beef and chicken options as well. Start the meal with a za’atar margarita or Turkish pickleback (chilled raki, a Turkish anise liqueur, served with pickled turnip juice), or take advantage of the extensive aperitif service, offering a range of Mediterranean liqueurs.

The original Zaytinya, in D.C., opened with an ambitious wine program featuring wines from Greece, Lebanon and Turkey almost exclusively. (It has earned a Wine Spectator Award of Excellence since 2014.) Diners seeking classics from Italy, France, the United States and elsewhere were invited to branch out. The New York location retains a similar focus on these wines—fans of Chateau Musar will be pleased with the multiple vintages of reds and whites on offer—though more international bottlings have made their way onto the list. Still, with such fascinating offerings among the more than 110 wines on the opening list, especially those from Greece, there’s hardly any reason not to try something new.

Jordi Paronella, wine director at ThinkFoodGroup (the hospitality company behind José Andrés’ restaurants), told Wine Spectator, “Our goal is to remain authentic to the regions we want to highlight and help guide our guests into a wine they may have never even considered, and in doing so, hopefully introduce them to something new and exciting.” Helpfully, the list includes explanations of Greek wine regions, plus primers on the wines of Turkey, Israel and Lebanon and a glossary of wine and grape names (complete with nifty pronunciation guides).

The street-level space, on the corner of West 28th Street and Broadway, is ideal for a large meal with friends and family to celebrate a special occasion or for popping in to have a quick bite and people-watch through the restaurant’s large, street-facing windows. Designed by David Rockwell, the dining room feels breezy, intimate and relaxed (though not quite casual) and features warm lighting, light blue accents, gentle curves and a large bar. The friendly, open atmosphere is intended to attract younger guests to the Ritz-Carlton brand. Two live olive trees anchor the dining room, which seats 150 and is open both to hotel guests and the public. Several large wine towers sit at one end of the room, just conspicuous enough to pique an enophile’s curiosity but subtle enough to blend in.

A rooftop bar, Nubeluz, is set to open later this summer on the hotel’s 45th floor, where guests will be able to enjoy sweeping views of lower Manhattan in a Roaring Twenties atmosphere. In the fall, the new Ritz-Carlton will also become home to the first New York location of Andrés’ the Bazaar, which currently has an Award of Excellence–winning location in Miami Beach and will be coming to Washington, D.C., later this…