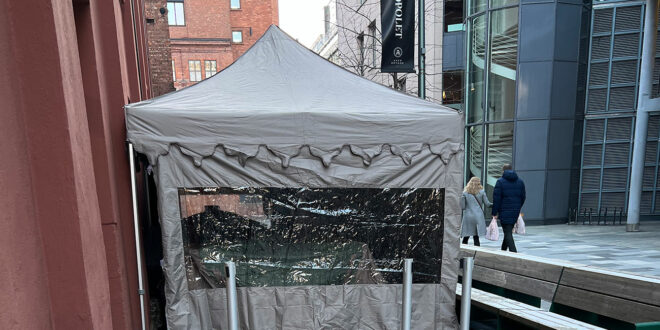 Some people have already braved wintry conditions to queue outside Vinmonopolet’s main store at Aker Brygge in Oslo ahead of the next release of top Burgundy wines on 9 February, the retailer said.

The first two people arrived on Thursday 12 January, ‘so they will spend four weeks outside the store’, said Arnt Egil Nordlien, senior product manager for fine wine and auctions at the Norwegian state-owned alcohol retailer. ‘Today there are six people in the queue.’

Nordlien told Decanter that Vinmonopolet often sees queues for fine wine releases, but this tends to start particularly early for Burgundy, due to the rarity of the region’s top labels.

The retailer has set up tents to help those willing to sleep outdoors to get hold of a prized bottle.

Temperatures in Oslo will likely drop below zero degrees Celsius on several days in the next week, according forecasts from the UK Met Office.

Around 530 different cuvées from many of Burgundy’s top producers are to be released by Vinmonopolet from 9 February.

Most releases will be from the 2020 vintage, but not all. Domaine de la Romanée-Conti wines from the 2017 and 2018 vintages will be released this time around, with the famous producer’s 2019 and 2020 vintages set to be kept back until next year, Nordlien said.

‘We are a monopoly, so our business works differently,’ Nordlien said. ‘We have fixed margins, so even on the top wines it will only be a small margin. It is not possible to allocate in advance.’

For some of the most sought-after labels, however, customers are limited to purchasing one bottle each.

There is a sort of code of honour among those willing to sleep outdoors and wait patiently for an opportunity.

‘We let the queue regulate [it]self,’ Nordlien said, adding, ‘You cannot cheat. There are facilities available close by (toilets, showers, food) and they all know who is number one to six in the queue. So there is no problem using the facility of your need.’

Vinmonopolet’s fine wine range is sold in 12 stores across Norway, and is also made available online – but not before physical in-store release.