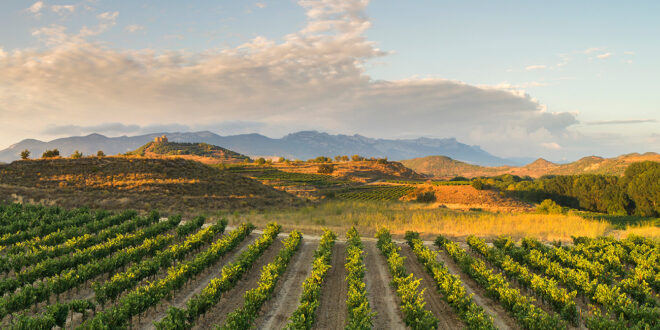 As Spain’s most renowned wine region, Rioja has a firm place in all wine lists around the world. It remains a place of exciting creativity and transformation, home to some of the most talented winemakers. Discover all about the region’s geography, history, climate and grape varieties, as well as its diversity and the innovation happening alongside the long established approaches and styles.

Located in north-eastern Spain, Rioja DOCa covers most of the autonomous region of La Rioja but also extends to neighbouring Basque Country, Navarra and Castilla Y León. With the city of Logroño as its epicentre and the river Ebro as its axis, Rioja stretches for about 100 km along the river’s banks, from the towns of Haro, on the western edge, to Alfaro, east.

Rioja sits on a plateau with an altitude of between 300 and 800 metres, sheltered from the Atlantic by the Sierra Cantabria to the north and west, and from the Mediterranean by the Sierras de la Demanda and de Cameros, to the south. This results in a predominantly continental climate, although depressions in the mountain ranges allow for cool Atlantic and/or warm Mediterranean winds to influence sub-regional and vintage-specific conditions.

Viticulture in Rioja goes back more than 2000 years, thanks both to Iberian tribes and Roman settlers. Rioja played an important role in the development of Spanish language, culture and historiography: the first Castilian words were written in the 11th century A.D. within the estate of the Yuso monastery (near San Milán de la Cogalla, southwest of Logroño); monk Gonzalo de Berceo wrote the first poems in Castilian in the neighbouring monastery of Suso. Many of the poems written at the time referenced local wines and viticulture.

The fast development of Rioja’s modern winemaking era began when, in the second half of the 19th century, France sought alternatives to domestic wine after seeing its vineyards devastated by phylloxera. Merchants from Bordeaux swarmed to Rioja and the city of Haro soon became a trading hub where trains loaded with wine containers left for the port of Bilbao to then be shipped to France. This brought significant wealth to the region in a very short period of time, while also bringing in foreign expertise, knowledge and trends.

Perhaps the most important and lasting influence of this ‘French invasion’ was the use of oak. The French market demanded oak-aged wines, which Riojan winemakers hardly produced but quickly introduced to meet demand. And thus the modern Rioja wines, with clear wood influence and ageing classifications, was born. When the region received its DO (Denominación de Origen) status in 1925, the ageing categories (Crianza, Reserva and Gran Reserva) were legally defined.

Rioja is best known for its red wines, with Tempranillo as the flagship and most planted grape. Graciano, Mazuelo and Maturana Tinta are grown in small quantities and mostly used as blending companions to Tempranillo. Garnacha Tinta, the second most planted variety, is experiencing a real renaissance, namely through a renewed interest in the incredible stock of old Garnacha vines.

Viura remains Rioja’s main white grape, although other indigenous white varieties are being rediscovered with great success. Tempranillo Blanco (a natural mutation of the red Tempranillo) and Maturana Blanca, whose presence in the region was first recorded in the 17th century, are performing particularly well. A good example of wine made from these two grapes is Límite Norte by Ramón Bilbao.

Rioja has 66,200 ha under vine, divided into 113,700 plots tended to by 14,800 passionate growers who supply the region’s 600 wineries. There are three larger subregions with distinct altitude, climate and soils – although there’s also great intraregional diversity thanks to different mesoclimates and microterroirs. West to east…