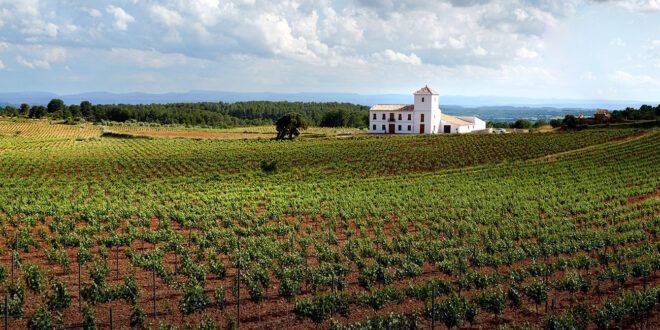 Montesanco – the rebirth of a cinematic landscape

Led by a passionate husband-and-wife team, Montesanco is indeed a project of love: for the land of Utiel-Requena, for its indigenous grapes and for ‘the good life’.

María Sancho and Paco Cotino took over a quasi-abandoned winery surrounded by rolling hills and old vines of Bobal, and embarked on a brave project of recovery that condenses the finca’s energy and history.

What is now the home of Montesanco was originally known as Casa de la Viña (house of the vine), built in 1882 by Fidel García Berlanga as the production hub for the 500 hectares of vines surrounding the winery and manor. García Berlanga would go on to become mayor of Utiel and president of the council of the region of Valencia. During his tenure he fiercely fought for the interests of local wine growers. Fidel’s grandson, on the other hand, became known for his creative genius. Luis García Berlanga is considered one of the pioneers of m modern Spanish cinema, having directed and written iconic titles of the country’s silver screen history.

The family’s creative turn, along with the economic and political challenges of the early 20th century, did lead to the demise of Casa de la Viña as a viticultural powerhouse. But its essence and spirit remained, and when María and Paco acquired the property (the built structure and 40 hectares of land) its rebirth began.

The couple was taken by the cinematic character of the landscape, the uniqueness of the prephylloxera Bobal vines (some planted over 140 years ago) and the imposing beauty of the winery. An architect by training, Paco immersed himself in a thoughtful project of restoration and reimagination, preserving key architectural features – including ten of the original tile-lined ‘trullos’ (room-sized, underground fermentation chambers) and a beautiful watch tower that served as a dovecote – while bringing the space to the 21st century.

The same dedication and attention to detail was applied to the recovery of the vines. Montesanco’s 40 hectares are now certified organic and managed under biodynamic principles. There’s a firm belief in the recovery of the ancestral viticultural knowledge, in the ‘wisdom’ of the old vines, and in the need to preserve biodiversity.

María and Paco arrived at Casa de la Viña with two decades of experience at their first project, Bodegas Aranleón. With Montesanco they found an opportunity to delve deeper into the character of the three varieties grown at Casa de La Viña – Bobal, Macabeo and Tempranillo – and to produce more exclusive, characterful wines that reflect the long history of the vines they hail from. 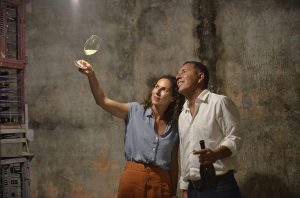 Unapologetic about favouring a more traditional, robust style, the couple produces a range with incredible character that speaks of their personalities as much as of the beauty of the landscape they adopted. They are also experimenting with lower intervention approaches, aiming to arrive at an ever purer expression of the unique vineyards they are now guardians of.

There’s a very particular poise and calm energy running through Montesanco’s wines. It can also be felt in the space María and Paco have created, which comes to life in the tastings and concerts they host. It all seems fitting, and almost inevitable, in a place so full of stories and intricate details.

Tasted and scored by the Decanter team

Món Macabeo, 2021
Alc 13.5%; 100% Macabeo (Viura)
Characterful expression of Macabeo, with a robust structure and surprising width on the mid palate. Well defined aromas of lemon and apple blossom are followed by flavours of fleshy pear, preserved lemon and…