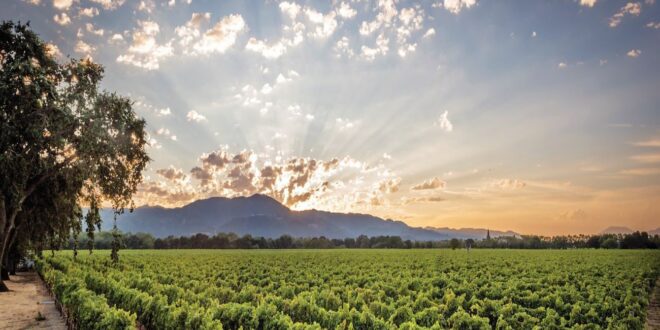 Superstars like Robert Mondavi, Schrader Cellars, To Kalon Vineyard Company and Cliff Lede have all built stellar international reputations firmly on To Kalon fruit. Iconic and historic, yet always open to improvement.

‘While the To Kalon vineyard has been farmed sustainably for many years, the challenge was in the commitment to a certified organic programme,’ said Blake Wood, director of vineyard operations at Robert Mondavi Winery. ‘There is a mindset shift there. The margin for error is very narrow. It’s been fun to watch our team respond to this challenge.’

The To Kalon legacy

To Kalon vineyard, well situated in Napa’s Oakville appellation and planted with just over 80% Cabernet Sauvignon, is primarily owned by Constellation Brands. Today 177ha are managed by the Robert Mondavi Winery with an additional 94ha held by University of California, Davis and Beckstoffer Vineyards, among others.

To date, approximately 134ha of To Kalon have received the CCOF certification. Younger, up-and-coming vineyard blocks await certification while several established blocks act as buffer zones where the vineyard abuts conventionally-farmed properties. Organic certification on this scale marks a major milestone for both To Kalon and Napa Valley.

Thomas Rivers Brown, winemaker at Schrader Cellars expanded: ‘This is an important moment for the industry. When such an iconic, high-profile vineyard like To Kalon makes the commitment to organic farming, it demonstrates a belief that it truly does impact quality for the better. Through organic practices, we’re making better wine by helping to balance yields, increase concentration and manage canopies with minimal intervention.’

The challenges of converting to organic viticulture

Transitioning a vineyard with the size, scope and reputation of To Kalon from conventional farming to organic is an incredible undertaking. It requires detailed adherence to stringent standards regarding the use of vineyard applications, renewable resources, soil and water conservation. It also commands significant documentation and many milestones being maintained to both achieve certification and pursue Constellation’s future-focused sustainability plan.

It’s no secret that organic viticulture demands a long-term commitment and willingness to flex and adapt to whatever drama the season unleashes. As noted by Sally Johnson Blum, director of winemaking at Robert Mondavi Winery: ‘The main challenge with farming organically is that there is no margin for error. In a difficult vintage, our options to adjust and adapt are extremely limited. Our vineyard team has to be several steps ahead of Mother Nature at all times. It’s a big challenge, for sure. Was it worth it? Absolutely, 100%.’

Blum added: ‘Weed control is a major challenge in organic viticulture. Mechanical weed control is one of the best options, but the additional tractor passes can present a carbon emissions challenge. To address this, we are beyond thrilled to have purchased the first six fully electric, driver-optional smart tractors in the industry, made by Monarch Tractor, which was co-founded by Carlo Mondavi.’

The First Organic To Kalon Vintage

The first certified organic grapes from the To Kalon vineyard will debut in this year’s 2023 vintage. Will the wines echo the changes in the vineyard? Andy Erickson, Napa icon and winemaker at To Kalon Vineyard Company, thinks so: ‘Organic farming in To Kalon Vineyard has always been very important to me. We live and work among the vines, so it’s good to know that we’re farming…