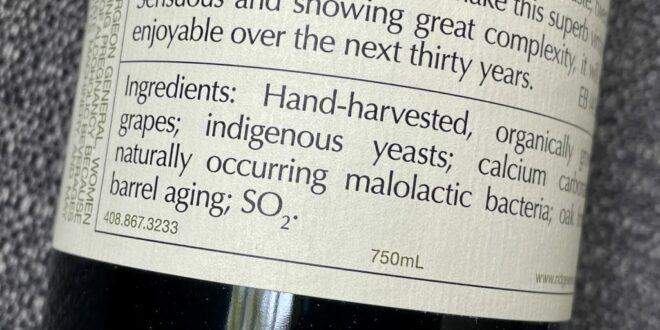 Ingredient Labeling In Prospect in the US

On the heels of new EU requirements to make ingredient and allergen information available to consumers on wine labels (enforceable from 8 December 2023), the US Alcohol and Tobacco Tax and Trade Bureau (TTB) announced on 17 November 2022 that it will issue new regulations for ingredient labeling of American wine within a year.

Many of us in the American wine industry have long supported the idea of ingredient labeling. Since the end of Prohibition in 1933, however, alcohol has been regulated by agencies in the US Department of Treasury (rather than the Food and Drug Administration) and those bodies have not seen fit to require beer, spirits, and wine to carry the same ingredient and nutritional labels as all other food and drink in the US. That is, unless they are under 7% alcohol by volume, in which case they must adhere to FDA labeling guidelines.

No one knows precisely the cause of the glaring exception that allows wine over 7% to escape the government’s otherwise comprehensive consumer labeling requirements, though a combination of tradition, bureaucratic inertia, and heavy lobbying by the alcohol industry have presumably played a significant role.

In 2003, the National Consumers League (NCL) and the (decidedly anti-alcohol) Center for Science in the Public Interest (CSPI) submitted a petition to the TTB requesting that it require wine, beer, and spirits labels to include similar facts to all other food and beverage packaging, including calorie count, allergens and all ingredients and additives.

Three years later the TTB responded to this petition with the introduction of an interim set of guidelines for the voluntary use of statements about allergens and indicated that further, permanent rule-making might be forthcoming regarding other elements of the petition.

For 16 years no further regulations affecting this issue emerged from the TTB.

Continue reading this article on JancisRobinson.Com

This article is my monthly column at JancisRobinson.Com, Alder on America, and is available only to subscribers of her website. If you’re not familiar with the site, I urge you to give it a try. It’s only £8.50 a month or £85 per year ($11/mo or $111 a year for you Americans) and well worth the cost, especially considering you basically get free, searchable access to the Oxford Companion to Wine ($65) and maps from the World Atlas of Wine ($50) as part of the subscription costs. Click here to sign up.

The post Ingredient Labeling In Prospect in the US appeared first on Vinography.