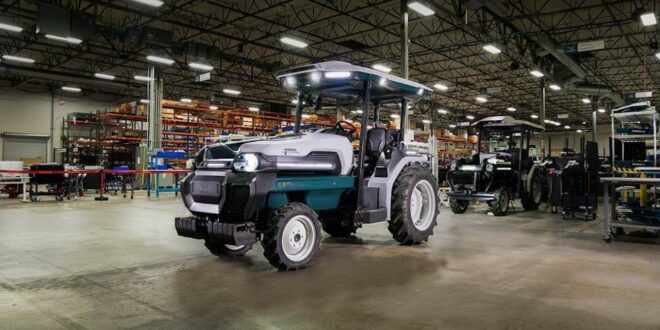 Flight of the Monarch: Can a tractor save the butterflies?

The name stems from the monarch butterfly, which is now classified as Endangered by the International Union for Conservation of Nature (IUCN). The population has been in decline since 1974, when glyphosate, most commonly known as the brand name Roundup, appeared on the market.

The Challenge has been Mondavi’s invitation for his winemaking peers to join him in committing to moving away from herbicides and towards permaculture. His winery, RAEN, on the Sonoma Coast, produces a rosé that raises awareness for the Challenge and donates proceeds to support insect and vertebrate conservation.

This philanthropic bottling of wine is often the whole story when it comes to wine and environmental causes, but not in this case.

In 2018, Carlo Mondavi and a group of engineers founded the electric tractor company: Monarch. The aim was to produce a fully electric, self-driven, smart tractor that could allow farmers, not just wine growers, to move away from the use of herbicides.

‘Since the year 2000, there has been a 70% decline in insect biomass in Europe,’ Carlo Mondavi told Decanter. ‘For birds, it’s around 50%. We’re experiencing an apocalypse globally when it comes to insect species, including pollinators,’ Mondavi continued. ‘To farm without synthetic chemicals, it just costs more, and already 45% of American farms are not profitable.’

Family farms in the US, in particular, are an endangered concept. In 1900 half of the country’s citizens were farmers; today, that number is 1.8%. The lifestyle is difficult; profit is unpredictable, and the work is very hard. Younger generations are opting not to follow in their family’s footsteps, and multinational conglomerates are acquiring more and more of those farms if they survive long enough to be sold. Many are going bankrupt.

The challenges facing large farms and vineyards include skilled labour shortages and profitability. The response to many of those issues historically has been through chemical technology, namely the herbicide glyphosate or Roundup.

The problem has been that 95% of spraying on farms is missing its target. This practice is inaccurate and thus ineffective, and the long-term damage of chemicals on agricultural areas is still being realised. Herbicide goes into soils and groundwater. Its use, however, can be reduced by 100%.

The Monarch tractor represents a single solution to a number of challenges facing farmers the world over. The conventional small diesel, torque-powered farm tractor is the carbon equivalent of 14 passenger cars. It is a necessary piece of equipment for a farm of any significant hectarage, but its limitations go beyond its carbon footprint.

The Monarch tractor is a zero-emission option; it is equipped with mapping technology and, once programmed, can carry out farm operations without a driver. The Monarch also comes with technology that allows farmers to improve their use of conventional farming, like spraying accuracy to within two centimetres of the target.

As an electric farm vehicle, a charged Monarch can also serve as a generator, with the ability to power a small farm, a conventional three-bedroom American home, or a small village in developing countries. This could allow farms and villages to become self-sufficient if partnered with a solar array (Monarch is partnering with solar technology companies to make this a reality).

Mondavi never saw himself necessarily involved with a technology company, but the urgency of his Monarch Challenge made the partnership a patently obvious step for him. ‘Agriculture is responsible for 30% of the planet’s carbon emissions,’ Mondavi stated. ‘It uses 50% of the planet’s usable land and 70% of its water resources. The opportunity for impact here is tremendous.’

The wine world has come out to support the launch of the Monarch’s MK-V tractors. California’s Constellation Brands, which holds some of the state’s most renowned vineyards, including To Kalon, bought the first…