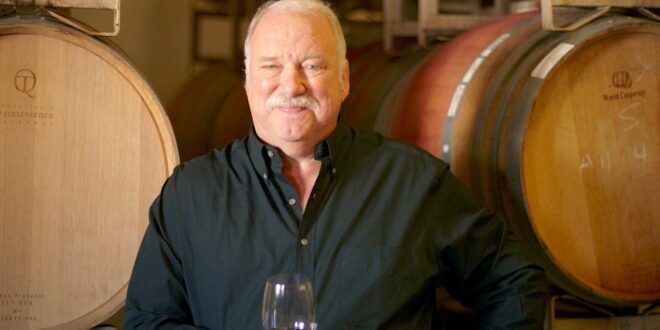 Michael Martini, who was born into a Napa Valley wine dynasty and followed in the winemaking footsteps of his father and grandfather, died Tuesday after a brief battle with lung cancer. He was 73.

Martini retired from Louis M. Martini winery in 2015, after 40 years of making wine for his family. Late last year, Martini found himself struggling to breathe. He was diagnosed with stage 4 cancer on Dec. 23, according to friend and fellow winemaker Ed Sbragia. Martini passed away at his home in Dillon Beach, Calif.

“Mike was larger than life but he was a straight shooter,” said Sbragia, a former Beringer winemaker who met Martini decades ago. “Together with his wife, Jacque, he was a vibrant, vivacious, fun-loving person.”

Martini was born Nov. 7, 1949, in St. Helena. His grandfather Louis M. Martini had emigrated from Genoa, Italy, and was still a teenager when he started making sweet wine with his family in San Francisco in 1906. Martini’s father Louis P. Martini grew up in Kingsburg in San Joaquin Valley, where Louis M. operated L.M. Martini Grape Products. As the end of Prohibition approached in 1933, Louis M. made a risky decision to build a winery in St. Helena, believing that dry wines like Cabernet Sauvignon were the future of the wine business.

Martini’s father and grandfather were like day and night. Louis M. was outgoing, fearless, while his son Louis P. was quiet and scholarly. Mike took after his grandfather. “Mike was a very funny, entertaining guy,” recalled sister Carolyn Martini, who was the winery’s CEO until the family sold it to E. & J. Gallo in 2002.

Martini started working in the cellar of the winery in 1974 after a brief stint in the military. He commuted to U.C. Davis from St. Helena to get his degree in fermentation science. In 1977, he became head winemaker, replacing his semiretired father. During his tenure, the winery was known for making elegant wines that emphasized fruit and subtlety. “They weren’t in-your-face wines,” Sbragia said, “but he made some killer wines. He was a really good winemaker.”

Martini was active in the wine community, serving as president of the Napa Valley Vintners association, an organization his grandfather helped establish. He also served on the boards of the American Society for Viticulture and Enology and the California Wine Institute. In his free time, Martini played lead guitar for Private Reserve, an ad hoc rock band of winemakers (including Sbragia) that played wine events and cruises.

Martini lived large, his sister Carolyn said. “He liked to eat and drink and be with his friends all the time. He had a wonderful time for 73 years.”

Martini is survived by his wife, Jacque, and two daughters, Shana and Larkin.