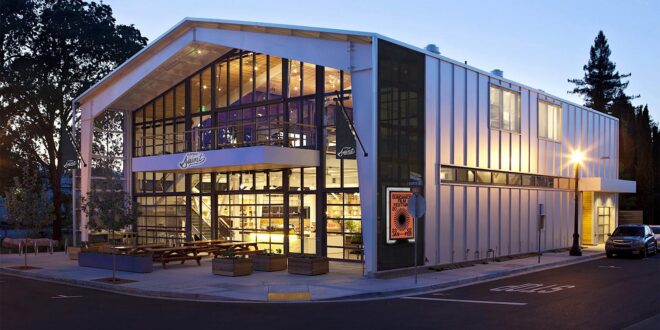 In December, the team at Wine Spectator Award of Excellence winner Little Saint announced that co-owners Laurie and Jeff Ubben would take full control of the plant-based, farm-to-table restaurant in downtown Healdsburg, Calif.

Philanthropists and owners of DuMol Winery, the Ubbens opened Little Saint in 2022, in a partnership with Kyle and Katina Connaughton, co-owners of Grand Award winner SingleThread Farms, and their Vertice Hospitality group. As of Jan. 6, the Ubbens are the sole owners. They are closing operations for a few weeks while they develop new menus in collaboration with Little Saint Farm and reimagine the lower level of the restaurant’s building as a convivial, all-day cafe and lounge. Chef de cuisine Bryan Oliver, wine director Alex Sarovich and executive pastry chef Baruch Ellsworth are staying on.

In a statement, the Ubbens said the intent of Little Saint was to celebrate local farmers and talent while standing up for what they believe in—kindness to the community, planet and all beings. “Under the direction of Kyle and Katina Connaughton and Vertice Hospitality—who began this journey with us—we have been able to launch Little Saint,” the Ubbens stated. “Thanks to the efforts of this team and our dedicated farmers and vendors, we have laid a foundation for culinary innovation. It’s with much gratitude and excitement that Little Saint is ready to pick up where Vertice leaves off and will manage all food and beverage operations.” The Ubbens said they remain devoted to the restaurant’s plant-based cuisine.

“We are proud to have been a part of this very special collaboration within our community and to have the opportunity to participate in Little Saint’s ideation to operating all the way through its first year,” said the Connaughtons in a statement. “We are excited to see what’s next for Little Saint and to watch it grow and thrive under new management.”

The Connaughtons noted that they and Vertice, which they co-own with CEO Tony Greenberg, are focused on creating new SingleThread agricultural experiences on its farm in Sonoma’s Dry Creek Valley and have other projects in development.—A.R.

In December, Cooper’s Hawk Winery and Restaurant entered Iowa, with a new location in Clive, part of the Greater Des Moines area. The popular urban winery–restaurant group, founded by Tim McEnery, premiered in 2005 in Orland Park, Ill., and now has more than 50 venues across 11 states, including the Esquire by Cooper’s Hawk location in Chicago, which has held a Best of Award of Excellence for its wine list since 2020.

“Our team was most excited about the community in Clive,” a Cooper’s Hawk representative told Wine Spectator via email. “Everyone has been incredibly welcoming and excited—Clive has incredible liveliness and energy, which is so fun and important when bringing a new concept into a community.”