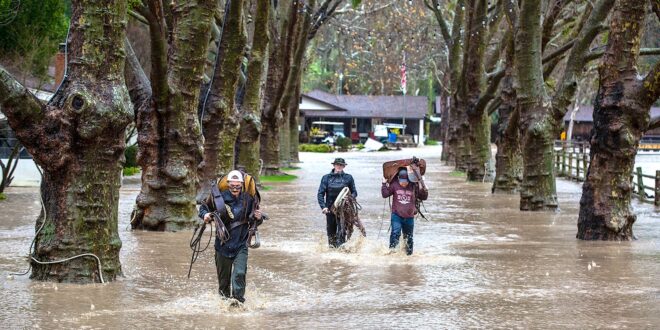 After years of drought, much of California has been hammered with snow and rain since New Year’s Eve, including heavy precipitation from back-to-back strong “atmospheric rivers”, and reports of floods, fallen trees, high winds, power outages, evacuations, sink holes and mudslides. So far, 17 deaths have been attributed to the weather in the Golden State. While several wine regions have been impacted, it appears much of the wine industry is going to emerge unharmed.

“There’s good and bad,” Jason Haas of Tablas Creek in Paso Robles told Wine Spectator. “The good is that we’ve surpassed our annual winter rainfall average, and after consecutive drought-reduced vintages that is a relief.” He adds that cover crops in his vineyards were established enough to keep erosion to a minimum, and the hilly topography and [porous] calcareous soils mean there’s really never standing water around the vines.

“The bad is that a lot of the local creeks were overwhelmed by this rain and have flooded roads. One of the main access roads out to us and lots of other wineries, Adelaida Road, looks like it was badly enough washed out that it may be closed for months,” he added.

Luckily, vineyards are dormant this time of year. It is several weeks away from bud break, when tender leaves emerge and can be damaged by such weather. Even some standing water in dormant vineyards typically won’t cause any concern, except for erosion.

Unfortunately, erosion is a concern for nearby Halter Ranch in Paso Robles. According to marketing manager Gracie Nino, there was major flooding after seven inches of rain in a two-day period. “The retention ponds were completely overwhelmed and are all severely damaged, the vineyard sustained flooding and we are seeing erosion damage in many of the blocks,” she said. “And the roads throughout the vineyard will all need to be redone.”

To the south, Santa Barbara got drenched and there were plenty of road closures, including multiple stretches of Highway 101. Runoff flooded downtown Santa Barbara—a video of a man paddling a kayak in the neighborhood went viral. No word on damage to downtown restaurants and tasting rooms yet.

Hundreds of miles north, a 275-year-old oak tree at Napa Valley’s popular V. Sattui tasting room has fallen over. Fallen trees, road closures and power outages aside, Napa and Sonoma’s vintners haven’t reported much damage to wineries or vineyards. The swollen Russian River, which has a history of flooding, appears to be receding.

But it is still early to assess the damage. For one, more rain is expected in the coming week, bringing potential flash flooding. Another atmospheric river arrived today. Moisture will stream ahead of a large cyclone in the eastern Pacific Ocean, which will produce heavy precipitation in northern California. And soils in California are saturated.

Road closures and washouts are also making it difficult to get around, and Californians are recommended to stay off the roads as much as possible. According to Joel Peterson, the executive director of the Paso Robles Wine Country Alliance, “On the east side of Paso, they’ve closed Cripple Creek, which is a feeder to many vineyards. The water just came over the roads—I believe washed out a few spots—so it remains closed. The Huer Huero creek is flowing for literally the first time I’ve seen it, and I’ve been here 21 years. It will be weeks, maybe months, before the ground dries up enough to get tractors in the vineyards.” He adds that it’s mainly the creeks that haven’t run in years that are the most affected.

Even at Halter Ranch, spirits remain high. “We have a great team who have been working hard the last two days to…