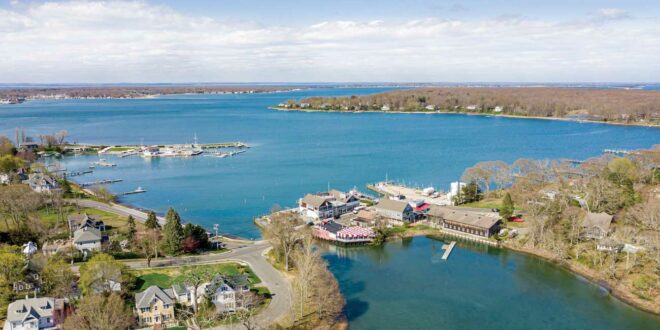 Battling traffic on the Long Island Expressway (LIE) towards wine country, about 120km east of Manhattan, you’ll find references to the layered history and various peoples who have inhabited the land in passing village and landmark names – Native Americans, Dutch and English settlers all left their imprint on New York’s Long Island. Visual cues also give away proximity to wine country. You’ll know you’re close to the promised land when the multi-lane highway falls away, suburbia thins out into flat, open farmland, and green signs marked with arrows and a cluster of white grapes pop up pointing ‘that-a-way’.

Long Island has three American Viticultural Areas (AVAs): North Fork of Long Island, The Hamptons, and a broader Long Island AVA, with 57 wine producers across all three. The North Fork AVA, established in 1986, remains the most relevant for wine tourists. It spans approximately 400km2 across the northern peninsula and includes the Robins and Shelter Islands.

The South Fork, defined by its enviable trim of sandy beaches along the Atlantic ocean, developed into a glitzy real estate enclave called The Hamptons. Due to land prices and labour costs, only a few wineries operate there. The North Fork, hemmed in by the Long Island Sound to the north and Peconic Bay to the south, evolved into a sleepier agricultural hub.

Wine tourism has always factored into the region’s development. Most wineries, being small or medium-sized, sell locally or regionally. Many move special cuve?es, experimental projects and small-production varietal bottlings through direct-to-consumer programmes, from walk-ins to wine clubs. As Swiss wine stays in Switzerland, so Long Island’s wines tend to stay put, too.

How to get there

There are frequent domestic and international flights to NYC’s three airports. Rent a car for the 160km drive to Greenport. Long Island Railroad (LIRR) trains depart New York Penn Station for Riverhead and Greenport, but you need a car to visit wineries. 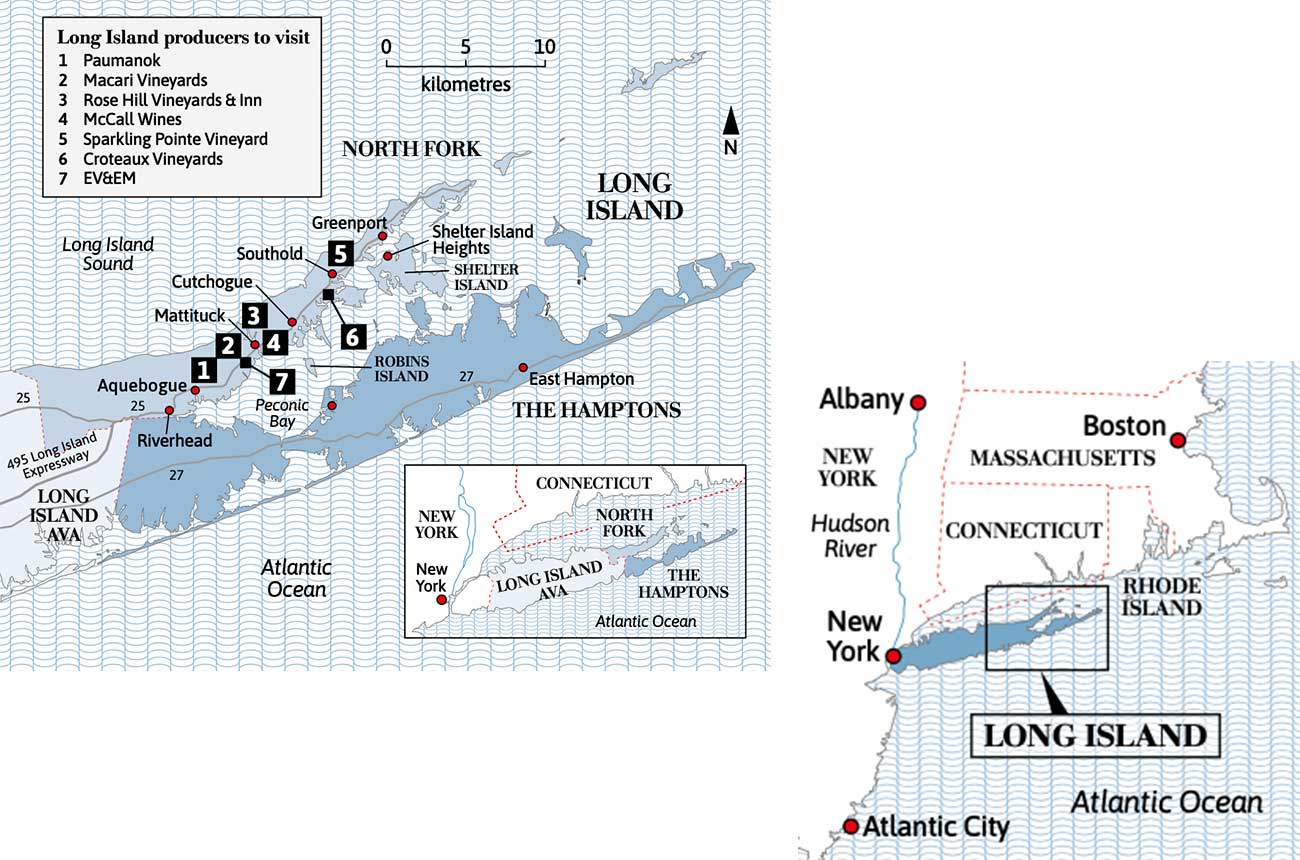 In 1973, Louisa and Alex Hargrave planted Long Island’s first vines. Vineyards started sprouting in earnest in the 1980s and ’90s, replacing farms with rows of French grapevines. Well-drained sandy loam soils suit the flat terrain. The moderate climate invites a range of varieties. As a New World region, flexibility is the rule rather than the exception. However, producers must adhere to one regulation: 85% of the fruit bottled and labelled with an AVA must be grown within the borders of said AVA.

Surrounded by water, the vineyards here are both blessed and vexed by a mercurial maritime climate. A fickle spring, followed by spikes and drops in the summer heat, heavy rainfall and high humidity, combined with a long growing season, bring mould, mildew and pests. These challenges have become more acute with climate change. Long Island offers an honest accounting of the vintage in every bottle.

On the wine route 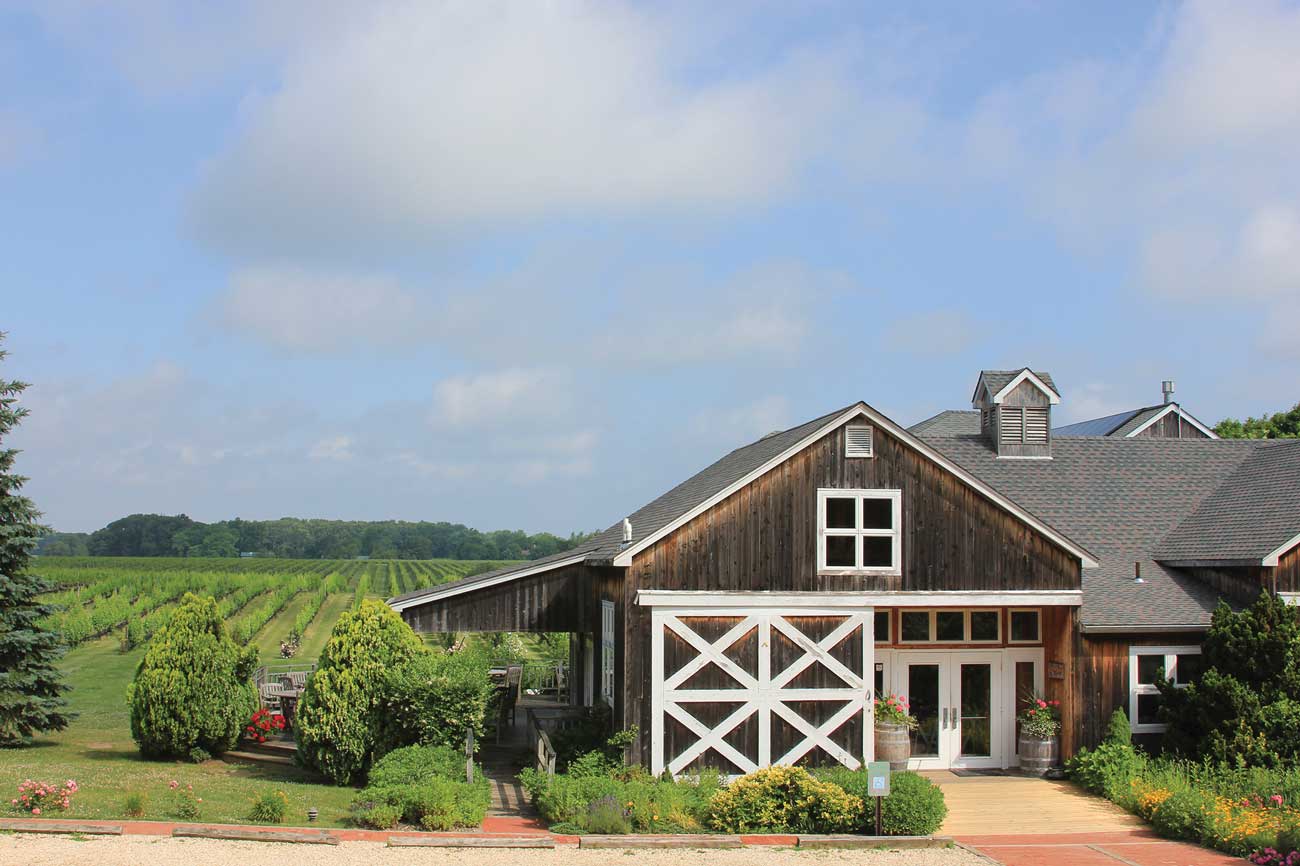 Despite the proximity to New York City and the uber-wealthy second homeowners of The Hamptons, Long Island’s wine tourism industry once chased the low-hanging fruit of party buses and high-volume ‘tastings’. The pandemic gave the industry a chance for a hard reset. Many have swapped their decor from a rustic country kitchen to modern farmhouse. Seated tastings in private tents, charming patios and…


Source : https://www.decanter.com/wine/discovering-long-island-494155/
Share
Previous Rhône trends to look out for in 2023
Next Zsirai Winery