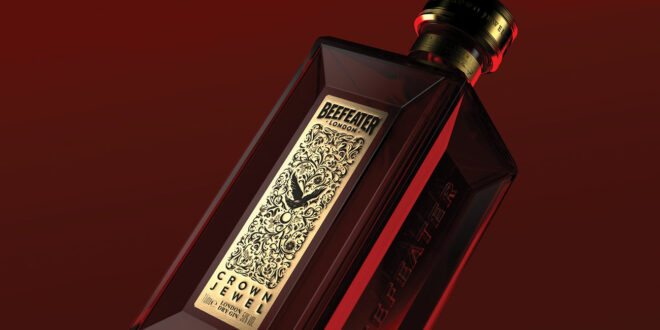 A jewel in the crown

The Beefeater distillery first launched its premium gin Crown Jewel back in 1993. Available only in travel retail, it became a collectible cult hit and a bartender favourite, but was discontinued in 2009. Thankfully the distillery has had a recent change of heart and Beefeater Crown Jewel (Alc 50%) is back and better than ever, with a higher bottling strength and striking ruby bottle inspired by the Crown Jewels in the Tower of London. It’s made to the same recipe as Beefeater Original but with the addition of grapefruit as a 10th botanical.

‘When you’re dealing with flavour, two plus two doesn’t equal four,’ commented Beefeater’s Master Distiller Desmond Payne at the launch, explaining how he experimented to create the super-charged citrus expression of the new release. Smooth and creamy, with real depth of flavour and intensity, Crown Jewel wears its higher alcohol lightly, delivering a big hit of juniper perfectly balanced by green chilli and black pepper spice plus lots of crisp lemon and grapefruit. Available from The Whisky Exchange, Master of Malt

Literally translated as ‘water of life’, aquavit is a Scandinavian spirit, which has been distilled in Nordic countries since the 15th century. Also known as akvavit and akevitt, it’s usually drunk neat, sometimes as a fortifying shot, or sipped before food or alongside beer. Like vodka, aquavit is distilled from grain or potatoes. Like gin it’s flavoured with botanicals; but instead of juniper, carraway or dill have to be the dominant flavours – Swedish akvavit also has to contain fennel. Aquavit is usually clear, but barrel-aged examples (common in Norway) are a pale gold colour.

The dark days of January call for warming, comforting drinks – and a Hot Buttered Rum fits the bill perfectly. This cocktail is classified as a toddy, a family of drinks created by simply adding hot water and a sweetener to spirits. Toddies have been around since the 18th century and are usually made with strong-flavoured spirits: whisky, brandy and rum. Try using Appleton Estate Rare Casks 12 Year Old, a decadent dark rum from Jamaica with a zesty orange peel character to balance the oily, buttery notes of the drink (Alc 43%, Amathus Drinks, Amazon UK, Drinkmonger, Master of Malt, The Whisky Exchange).

Method: Put two teaspoons of honey in a toddy glass, then add the other ingredients and stir well until the honey and butter have melted.

Distilled – An ultra-premium release from Brugal

Distilled – Cocktail making for all occasions

The post Distilled – The return of Beefeater Crown Jewel appeared first on Decanter.