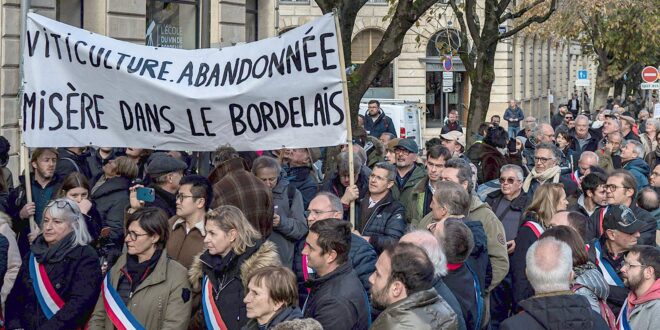 Earlier this month, a thousand angry vignerons and their allies marched through the streets of downtown Bordeaux, calling for help to save their livelihood. When they reached the doors of the Bordeaux Wine Council (CIVB), the local trade organization, they hung a dummy from a tree outside, representing financially troubled grapegrowers at risk of suicide, and piled dead vines on the doorstep.

The growers are demanding financial compensation in exchange for grubbing up their vines, and no one on the Place de Bordeaux was surprised. (Several officers of the CIVB took part in the march.) The region faces a crisis and grubbing up vines seemed the most direct and equitable solution. Trading for bulk Bordeaux has skidded to a halt.

The vignerons are calling on the French government to subsidize pulling up vines in Bordeaux’s less prestigious areas. They are asking for €10,000 per hectare, but the government has said that European Union rules prevent such funds. And that is leading to a crisis and anger.

How did one of the world’s most prestigious wine regions hit this point? “The problem today is not the price. The problem is there are no transactions,” said Christophe Chateau, spokesperson for the CIVB. Sales of bulk Bordeaux are so scarce, he said, the CIVB hadn’t published price quotations since October.

If you’re getting a sense of déjà vu, you’re not wrong. For decades now, Bordeaux has been grappling with shrinking sales of value wines. “There are regularly similar crises every 10 to 15 year because exports are not sufficient for compensating for declining consumption in France,” said Jean-Pierre Rousseau, CEO of négociant Diva.

In the years after World War II, the average French adult drank 150 liters of wine per year, mainly red table wine—that’s nearly 17 cases per person annually or half a bottle per day. Today they consume 40 liters, or four and a half cases per year. Spain, Italy and Portugal have seen similar declines. In France, drinkers are not only drinking less, they’re drinking differently—beer and cocktails are increasingly popular, and when they drink wine, they’re showing a preference for better reds as well as white, rosé and sparkling wine.

Back in 2010, following a similar price crisis, Bordeaux launched a strategy that meant structural changes. They would eliminate the lowest category of wine and improve the quality and taste profile of the next category up, as well as expand the production of rosé and sparkling wines. So far so good. Sales of Bordeaux’s sparkling wine or crémant has multiplied by four in ten years. “We don’t even know if we’ll have enough stock to respond to the market demand,” said Chateau.

At the same time, négociants have been tasked with finding export customers for the wine the French aren’t drinking. They’ve done a pretty good job, racking up record sales, shipping to more than 100 countries, from America to Sweden to Panama. And demand for luxury wines is particularly dynamic, but not value wines. “Demand remains very strong for Bordeaux’s fine wines for export,” said Rousseau, “[But] much less for entry-level and mid-range wines, at €20 starting price and below.”

America is a lucrative market for Bordeaux, particularly mid-range to premium cuvées. It’s the top export market in value. But America isn’t interested in the bottom of Bordeaux’s production. A decade ago, China solved Bordeaux’s crisis.

China first entered the market for Bordeaux in force after the 2008 global financial crisis. Consumers there initially soaked up a flood of cheap wine that no one else wanted. But not anymore. “For China, the first eight months of 2022, we are down 27 percent in volume and down 12 percent in value,” said Chateau.

It’s not just the pandemic impacting sales. “China was indeed a huge buyer a decade ago but there has been a gradual reduction in consumption and a transfer to branded wines from other countries,” said Rousseau. Chinese…