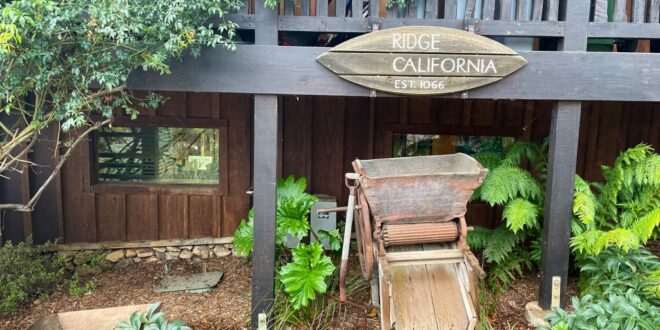 In 1968, a young Paul Draper was just beginning his career as a winemaker. After a brief stint making some wine in Chile, Draper returned to the San Francisco Bay Area and was introduced to some Stanford University scientists who had recently purchased an old vineyard in the Santa Cruz Mountains.

“They gave me a bottle of their 1962 and their 1964 vintage to try, and they were two of the best California wines I’d ever had,” recalls Draper. “I thought to myself, ‘these guys aren’t even home winemakers, and here are two wines that are so incredible at a young age, they clearly have a climate and a soil that is going to allow me to be involved in making some really fine wines.’ That’s what pushed me over the line.”

Draper took the job in early 1969, and by the mid-1970s he had become a full partner in Ridge Vineyards, and the rest, as they say, is history.

For more than 5 decades since, Draper and his business partners have produced some of California’s best and most iconic wines, including what many consider to be the state’s single finest example of Cabernet Sauvignon.

A Diamond Jubilee for Wine

Ridge Vineyards was incorporated and re-bonded by its founders, David Bennion, Charles Rosen, Hewitt Crane, and Howard Zeidler in 1962. The winery they purchased had been built in 1892, and the Monte Rosso vineyard that came along with it had originally been planted in 1886.

On the one hand, a lot has happened in the 60 years since its founding, but on the other, surprisingly little has changed at a winery that prides itself on what Draper calls “pre-industrial” winemaking.

Here are a few highlights from the last 60 years.

The winery’s 1971 California Cabernet Sauvignon came in 5th at the famed Judgment of Paris Tasting, beating Château Leoville Las Cases and all but one other California Cabernet. In a re-tasting of all the same wines in 2006, the Ridge wine took first place.

That original 1976 tasting put Ridge on the map, so to speak, ensuring consumer and critical attention from that point forward.

Ridge would expand slowly over the years, purchasing fruit from various vineyards around the state, and eventually buying two old-vine Zinfandel vineyards and a winery near Geyserville in Sonoma’s Alexander Valley in 1991. There it would establish its Lytton Springs tasting room and production facility, and preserve what Draper believed to be two of the finest old-vine field-blend vineyards in the state.

In 1987, Ridge was purchased by the Japanese Otsuka Pharmaceutical Co Ltd (parent company of Nature Made Vitamins and Crystal Geyser Water, among many others), which takes a largely hands-off approach to ownership, leaving Draper and his colleagues to manage the winery largely as they see fit.

That has meant producing a broad portfolio of varietal-specific and blended wines from around the state, crowned with three iconic wines: the Zinfandel-dominant blends of Lytton Springs and Geyserville, and the incomparable Monte Bello Cabernet Sauvignon.

In 2016 Draper stepped down as CEO and head winemaker. The CEO position was taken over by Mark Vernon, who joined in 1998 as General Manager and eventually became President and COO. Eric Baugher (who had been working alongside Draper since 1994) took over winemaking at Monte Bello. John Olney (who has been working at Ridge since 1996) took over winemaking at Lytton Springs.

Despite the changes in the winemaking staff…