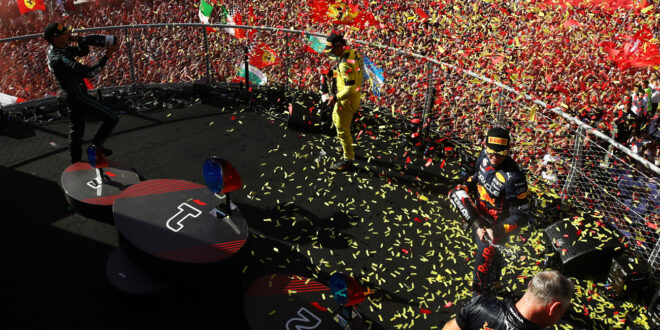 Cars and wine: A chat with Camilla Lunelli of Ferrari Trento

The 2022 F1 season finale took place on 20 November in Abu Dhabi, marking the climax of a 22-race spectacle which saw Max Verstappen (son of ex-F1 racer, Jos Verstappen) crowned champion for the second time on 9 October in Suzuka at the Japanese Grand Prix.

Since 2021, Italian sparkling wine house Ferrari Trento has been the podium sponsor for F1, a deal which was recently extended until 2025. Ferrari Trento is managed by the grandchildren of Bruno Lunelli, who purchased the estate in 1952 from founder Giulio Ferrari. I sat down in London recently with Camilla Lunelli, Bruno’s granddaughter, to talk cars and wine: two subjects close to my heart!

Do you train staff at F1 events to ensure your wines are identified and served correctly?

‘Ferrari Trento is the exclusive sparkling wine in The Paddock Club, meaning every day, thousands of bottles are being drunk by very affluent people. They care about service…we hired someone to focus solely on F1, overseeing serving and training.’

How many bottles of Ferrari Trento sparkling wine are opened every race weekend?

‘To give you an example, around 5,000 bottles were opened at Silverstone [the British Grand Prix in July].’

What was your most exciting race weekend of 2022?

‘We [the grandchildren of Bruno Lunelli who currently manage Ferrari Trento] usually take it in turns to go to international race weekends, but we were all at Monza. It was incredible; you have all the race fans and it’s Ferrari Trento’s “home” race, being in Italy. Giulio and Enzo Ferrari weren’t related but you could feel a connection.’

Being a podium sponsor must be a challenge given the potential for confusion between Scuderia Ferrari [the team] and Ferrari Trento [the winery]?

‘We thought that there might be some tension if a pilot [driver] from Mercedes or Red Bull, for example, is toasting their win with a bottle saying Ferrari on it, but everyone has been great so far – there have been no issues.

What is involved in your relationship with Formula 1?

‘Being the podium sponsor is not as simple as sending bottles to every race. As well as appointing someone specifically for staff training at F1 events, our export team plus the local importers take care of all external activations, including events.

‘We also take part in a charity initiative where, every other race, a signed jeroboam of Ferrari Trento Brut is auctioned on f1authentics.com. Last year, the proceeds went to the Keep Fighting Foundation [founded by Michael Schumacher’s family in 2016]; this year, the season began shortly after the commencement of events in Ukraine and so we decided that proceeds should go to the International Red Cross.’

Fuel made from wine waste to power racing cars

The post Cars and wine: A chat with Camilla Lunelli of Ferrari Trento appeared first on Decanter.