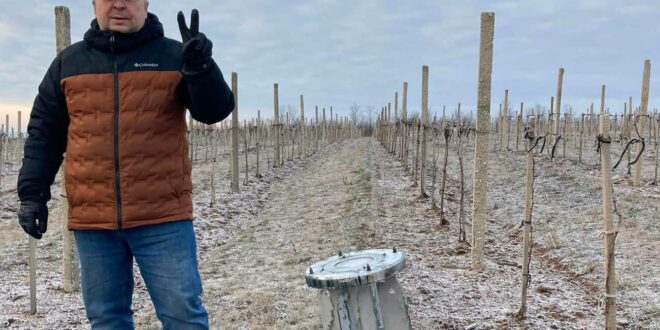 The release of the Ukrainian ‘Grad Cru’

It was the 5th of March and the second week of Russia’s war of aggression on Ukraine. That morning, Mykhailo and Georgiy Molchanov, the father and son team of the Slivino winery in the Mykolaiv Oblast in Southern Ukraine went out to prune their vineyard. Lodged in one row of the vines was an unexploded Russian missile from a ‘Grad’ launcher.

Meaning ‘hail’ in Russian, the name refers to the BM-21 systems that indiscriminately launch up to 20 of these missiles at once, something that has become a commonplace occurrence in Ukraine since the Russian invasion earlier this year. Due to their poor targeting ability, they’ve destroyed untold numbers of homes and civilian structures and killed tens of thousands of Ukrainian civilians.

There was little that the Molchanovs could do about this missile back then. Georgiy took a photo of his father making a ‘V’ for victory gesture and they posted it on Facebook. It circulated widely as one of many symbols of the Ukrainian endurance in the face of what had seemed to be, at the time, an unwinnable battle against supposedly-superior forces.

‘The explosive core was eventually removed but we’ve otherwise just worked around it as well as around others that are still out there, in the vineyard,’ Georgiy said.

Slivino is a small winery founded in 2018 which produces about 3,000 bottles a year. As the war passed the summer and harvest grew near, they and other wineries had to contend with the logistics of bringing in the grapes and producing new wines. Various wineries still have their vineyards occupied by the Russian army, but even those who don’t have been confronted with new challenges.

‘So many people volunteered to fight in the army that there were few left to work in the vineyards. We’re lucky that we don’t have mines because many vineyard owners have to deal with getting those out, which is a slow and complicated process,’ Georgiy said.

While Slivino was initially buying grapes when they started about eight years ago, they’re now only using their own vineyards. From the 2021 harvest, they had originally intended to make a small release pét-nat sparkling wine of just 400 bottles, based on Riesling, Pinot Noir and Muscat. Once the Russian invasion started, they decided to give it the name, ‘Grad Cru’ in reference to their now ‘missile-infused’ vineyard. Within a few days of announcing it in October, they sold out, with all the proceeds going directly to aid the Ukrainian military.

As a clear tribute to the Ukrainian dark sense of humour that has helped see them through this tragedy, the tasting note accompanying the bottles is, ‘of metal and gunpowder’.

Georgiy told Decanter that in addition to the vineyard work keeping him busy, he’s also been involved with a non-profit named Rebel Volunteers who coordinate direct humanitarian aid to civilians as well as to the military. Their main focus is their southern region between Kherson and Mykolaiv that’s been taking a massive, direct assault by the Russians. It’s easier to count the 50 or so days in Mykolaiv that they’ve not been bombed as opposed to the over 220 since the 24th February where they have.

As the war continues to rage and the Ukrainian army makes costly, yet sustainable progress in evicting the Russian invaders from their country, people who haven’t left have entered what Ukrainian sommelier, Jenia Nikolaichuk has written up as a ‘War-Life Balance’. Life goes on and while mortal peril can strike at any moment, much like the missile in Georgiy’s vineyard, people continue to work around it and are even looking to the future with hope, as shown by their re-joining the OIV.

When asked if the situation had improved since the Russian army left Kherson, Georgiy said, ‘Yes, it’s much quieter now and there are no missiles for the moment. We can only hope that this will lead to people coming back and things starting to…