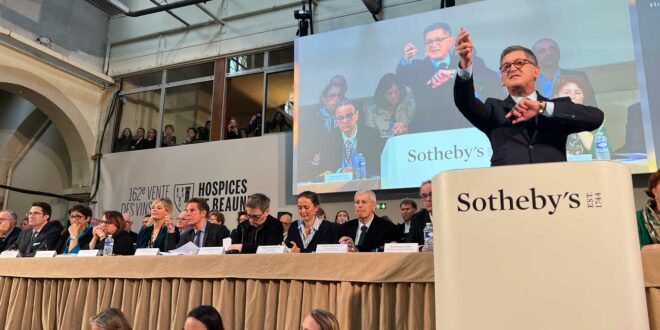 In what François Poher, director and chairman of the Board of Hospices Civils de Beaune, dubbed ‘historic and spectacular results’, the auction broke other records, including highest ever total for a charity wine auction and record total for any wine auction held by Sotheby’s, according to the auction house that managed the sale.

The average price per barrel sold over Sunday’s seven-hour auction also reached a new high, at €35,974 topping last year’s record-setting average price per lot of €34,980. Indeed, social media was buzzing with news of pre-sale estimates being surpassed by over 100%. Five barrels of Ba?tard-Montrachet Grand Cru, Cuve?e Dames des Flandres, for example sold for €324,000 each, more than double the pre-sale high estimate.

Proceeds from the auction, which supports the upkeep of the Hospices Civils de Beaune’s hospitals, came from the sale of 802 barrels, divided into 620 red wine lots and 182 white, the highest number of lots since 828 barrels had been auctioned in 2018.

Following the challenging 2021 vintage, early buzz for the sunny and dry 2022 vintage likely contributed to very strong prices. At a press conference the morning before the sale, respected French wine critic Bernard Burtschy proclaimed that there was ‘no doubting the high quality of 2022,’. He called this the ‘culmination’ of greater precision in the vat room and vineyards of the 60-hectare Hospices domain since director Ludivine Griveau took over direction in 2015. ‘This is the best vintage at the Hospices’, Burtschy said.

Tailed by television cameras, French journalist and writer Flavie Flament generated much excitement descending the auction rostrum to seated bidders, beckoning them to increase bids for the Presidents’ barrel.

Tasting the wines one day before the sale, the general impression was one of ripe but not overripe reds with impressive structure, and fleshy whites with fine dry extract and breadth.

Cooler terroirs, with deeper soils are generally more successful in the vintage, which boasts lower-than-average acidity and natural alcohol levels between 13.5 and 14%, remarked oenoligist Sébastien Lecomte, deputy director for the Hospices. To help maintain freshness, the estate harvested early in the morning and stored incoming grapes in refrigerated containers, which was important for aromatic freshness, Lecomte explained. Yields – about 40 hectolitres per hectare for the reds and 45 for the whites – are high in 2022, although not as high as in 2018. Most grapes harvested in excellent conditions over a three-week period from 25 August to 16 September were healthy as workers discarded at most four per cent of the grapes on sorting tables.