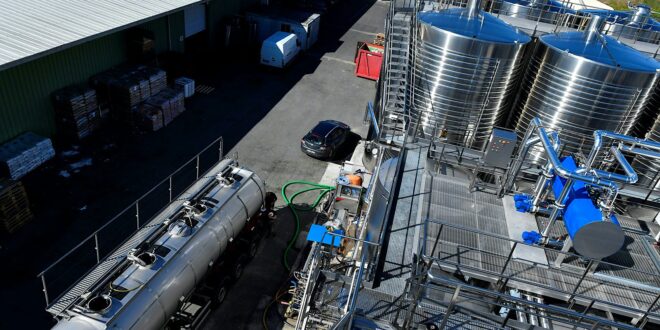 The trial in Bordeaux’s Tribunal lasted just six hours, but the figures discussed were mind-boggling for the wine trade. Finishing late at night on Oct. 27, prosecutor Nathalie Mathieu deconstructed an intricate, profitable web of consumer and customs fraud.

Over a period of two years, from 2016 to 2019, 131 tanker trucks hauled the equivalent of 380,000 cases of cheap Spanish wine north over the border into France, where a cohort of five wine professionals are charged with passing it off as more expensive French wine, mainly Bordeaux appellations including pricey Margaux, St.-Julien and Pomerol.

“It was so simple that it made a lot of money,” said Mathieu, basing her case on evidence gathered by the regional wine brigade for the French Directorate General for Competition Policy, Consumer Affairs and Fraud Control (DGCCRF) and French Customs. “It is unworthy of wine professionals, especially with the reputation that everyone knows of Bordeaux wine, to proceed in this way. And in such quantities.”

“It’s a record for the region, a fraud scheme on an industrial level,” said Frédéric Georges, lawyer for one of the plaintiffs, the Fédération des Grands Vins de Bordeaux. (In French cases of this kind, wronged parties can join the prosecution as plaintiffs.)

According to the prosecutors’ case, it all started with miserable weather. Back in 2013, a meager crop in Bordeaux left Michel Gilin, the sales manager for Celliers Vinicoles du Blayais (CVB), worried the firm wouldn’t have enough wine to fulfill their orders and maintain their client base. CVB belongs to the giant cooperative Tutiac.

Gilin, who is also a courtier, or wine broker, reached out to a Bordeaux négociant named Jean-Sebastien Laflèche, president of Defi Vin. They organized the purchase of cheap Spanish table wine, trucked to France using the Charente-based transport company TransBBP, run by Sylvie Bernard.

Bernard was also the administrative manager for a Charente négociant named Daniel Banchereau. Using Banchereau as a front, the official paperwork showed Banchereau an an intermediary client, who shipped the wine to Defi Vin, but the wine was never destined for there. Instead, Laflèche produced fake transportation documents, showing the wine to be French and sent it to CVB.

But the tanker trucks weren’t destined for CVB either. More fictitious documents added several confusing layers to the trail of traceability, until eventually, the wine, now classified as French table wine and generic Bordeaux arrived in the cellars of Bégadanet, a cellar run by Fabien Figerou in the remote northern Médoc, where it was bottled and rebranded as wine from prestigious Bordeaux appellations.

What began as a dodgy stopgap solution in 2013 eventually blossomed into a lucrative, well-organized wine crime scheme a few years later that was only discovered when French investigators stumbled upon suspicious wine label printing equipment during a drug investigation.

At that point, officials connected the dots between seemingly disparate incidents, including a statement given by Gilin in 2016 to the consumer protection auditors, during which he reportedly admitted to have sourced some wine from Spain to make up for the poor 2013 harvest. At the time he said, “the mechanism was dictated by the circumstances. No matter the supply, the important thing was the turnover and the margin.”

It’s unclear why it took several years for the fraud auditors to act, but in the meantime, between 2016 and 2019, the crime ring grew increasingly audacious, culminating in the trafficking of more than 380,000 cases worth of Spanish bulk wine.

At the trial, the defendants chose to remain silent when given an opportunity by Judge Boulnois to speak on their own behalf. Their attorneys accused French customs of being overzealous and a lawyer for Laflèche even claimed it was French consumers who were to blame. “The individual who buys table wine, whether it comes from Spain…