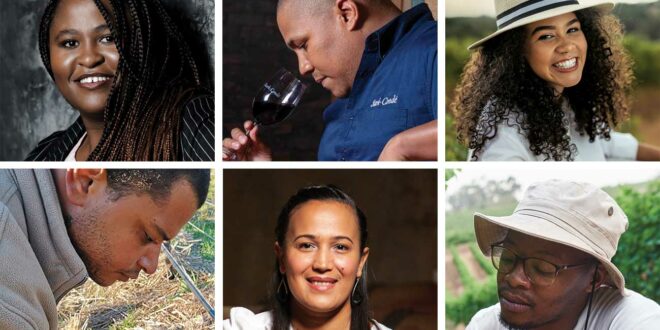 I wanted to preserve something from the past,’ says Paul Siguqa, standing in his stylish new tasting room in Franschhoek. ‘This is where they used to pay the people who worked on the farm – in wine. It was the dop room. People queued at this very door. Alcohol was a way of creating dependency.’

Brought up by a labourer on a wine farm, Siguqa is an entrepreneur who made money in communications before buying Klein Goederust in 2019. He decided to keep the name of the run-down estate that dated back to 1905. ‘The oppressors are part of the history of the farm,’ he says. ‘The good and bad need to be acknowledged.’

The dop system (dop is the Afrikaans word for an alcoholic drink) is a thing of the past, thank goodness, although its illegal use survived for much longer than some people are prepared to admit. Black farm workers are better treated than they were under apartheid, but agricultural labour remains arduous and poorly paid. Siguqa’s story is a rare example of accelerated social mobility within the wine industry. ‘We’ve shown people that it’s possible. A black person can own a wine estate and farm successfully. That’s why this is significant.’

But what about transformation in general? Well, after a number of false starts and dead ends since 1994, when South Africa’s first post-apartheid, democratic national elections were held, things are finally changing for the better. The Wine Arc, a brand home and hub for 13 black-owned brands – Aslina Wines, Bayede, Cape Dreams, Carmen Stevens, Koni Wines, La RicMal, Libby’s Pride, Mhudi Wines, Paardenkloof, Ses’fikile Wines, Tesselaarsdal, The Bridge of Hope and Thokozani – opened in Stellenbosch last year, and the number of black oenology graduates from Stellenbosch University and Elsenburg Agricultural College is growing exponentially, following the pioneering example of Carmen Stevens, South Africa’s first woman of colour to graduate from winemaking college, in 1995.

As more of those graduates succeed, others will follow. There are currently about 60 winemakers and assistant winemakers of colour in the Cape out of a total of 940. Not so long ago, Ru?dger van Wyk, arguably the most successful young black winemaker in the country at Stark-Conde?, was a rarity. But now there are an increasing number in important positions. There’s been a welcome momentum shift.

Many of these winemakers have been through the Cape Winemakers Guild’s Prote?ge? Programme, launched back in 2006. The three-year paid internship with Guild members aims to ‘cultivate the next generation of award-winning winemakers, viticulturists and future policymakers through mentorship and self- empowerment’, says former Guild chair Andrea Mullineux. To date, 31 prote?ge?s have completed the programme and 18 are employed in leading winemaker roles or have their own projects.

Until comparatively recently, black-owned brands were perceived as being of ‘substandard quality’, according to Denise Stubbs of Thokozani. There were certainly wines that demonstrated otherwise, not least from the now defunct Thandi Wine Estate, which became the first certified Fairtrade wine brand in the world in 2003 and enjoyed a strong consumer…