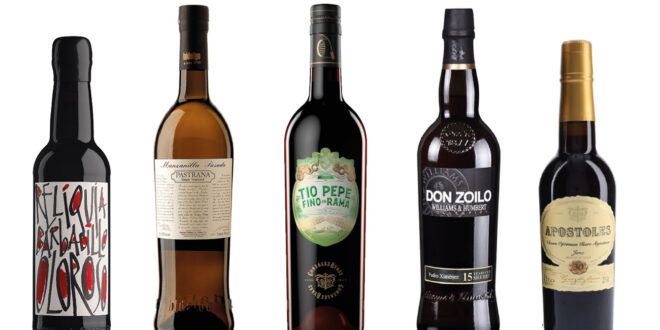 In my book Sherry is the single-most underrated style of wine from Spain. Even among wine lovers it suffers from misconceptions about taste (‘It’s too sweet!’), how to serve it (‘In a tiny glass from your granny’s cupboard?’) and strength (‘It’s fortified: is it as strong as a spirit?’).

But as any Sherry aficionado will tell you, this style of wine is as nuanced, enjoyable and complex as any fine wine from Spain. In fact it isn’t even a single style – but we’ll come to that later…

Sherry comes from Southern Spain, in the so-called ‘Golden Triangle’ of vineyards that lie between the towns of Jerez, Sanlúcar de Barrameda and El Puerto de Santa María. Sherries are fortified wines, meaning that a small amount of grape spirit (brandy) is added to them, after fermentation, to give them greater longevity and stability.

Sherry is an aged white wine that’s matured by being passed through a series of 600-litre barrels, in a system known as a solera. The solera system allows for fractional blending of the wines. The barrels in a solera are arranged in different tiers or groups, called criaderas, according to their age.

The oldest criadera holds wines that are ready to be bottled. When wine is removed from a barrel for bottling, that barrel will then be topped up with an equal amount of wine from the first criadera, which holds the youngest wines.

The first criadera will be topped up from the second criadera; the second from the third; and so on. This means that any Sherry will be a blend from different years.

Where you see an age statement on a label, such as 40 years, this will be an approximate average age. The blend will certainly contain wines much older than 40 years, but also some younger.

There are two broad styles of Sherry. The first is known as ‘biological’ and refers to wines that are aged under a thick layer of yeasts, called the flor. This flor prevents the wine from being exposed to oxygen. But it also interacts with the wine, eating sugars and other chemical compounds, and producing acetaldehydes, which give Sherry its distinctive ripe apple aroma.

The second broad style of Sherry is ‘oxidative’. These wines are aged without their layer of flor, so in contact with oxygen. Oxidative ageing gives Sherries a deeper colour and a complex nutty character.

Within these two broad types, the Sherry category is then broken down further into distinctive styles, depending on the exact method of ageing.

Fino is made from the white Palomino grape and fortified soon after fermentation to 15% abv. It is then aged under flor in a solera, for a minimum of two years. The resulting style of Sherry is fresh, pungently aromatic and very dry.

Manzanilla is initially made in the same way as fino. The difference is that it has to be aged in a solera in Sanlúcar de Barrameda. Here the humid sea air encourages a denser layer of flor. Similar in taste profile to a fino though the sea adds a salty character to this delicate wine.

Amontillado starts life as a fino before undergoing further ageing without its protective layer of flor. For some Sherry lovers Amontillado offers the best of both worlds, combining the freshness of fino with more evolved textural, nutty and creamy notes.

Oloroso Full is is aged oxidatively (without its blanket of flor) producing a Sherry that’s full-bodied, relatively high in alcohol and packed with flavours. Olorosos are dry and savoury, but they can seem to show a hint of sweetness thanks to the ageing process.

Palo Cortado is one of the rarest Sherry styles, which is a product of natural deficiencies in the flor layer. Traditionally it begins life as a fino, but casks that fail to develop a complete covering of flor are fortified to 17-18% abv, then aged oxidatively like an oloroso. In style, palo cortado combines amontillado’s aromatics with the fuller structure of an oloroso. The results…