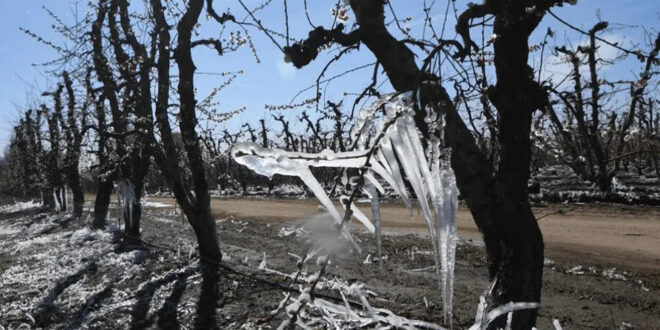 Early reports have suggested a significant frost impact in the Mendoza region, although producers were still assessing their vines. ‘We [are] talking about 10,000 hectares of vineyards affected,’ Mendoza’s sub-secretary of state Sergio Moralejo told reporters on Thursday, 4 November.

The Mendoza regional government has declared an agriculture state of emergency after temperatures plunged to as a low as -4 degrees Celsius on Sunday (30 October) and Monday (31 October). The Valle de Uco, Altamira, Cuyo and the Eastern and Southern regions of Mendoza were all impacted by the frost.

Vineyards in Patagonia and Salta were also impacted by the weather.

The regional authorities estimated that between 50% and 75% of Mendoza vineyards have been impacted by the freak weather, but in some cases producers fear they have lost their entire production.

On 1 November, Argentina’s Association of Wine Cooperatives (ACOVI), announced that at least half of the vineyards run by cooperatives in Mendoza had been damaged the frost.

‘This was a “black frost” caused by an out of season polar push,’ said Eduardo Soler, winemaker and founder of Ver Sacrum in Mendoza. ‘I have never seen -4°C in November.’

He told Decanter, ‘Most of the producers in Eastern Mendoza, Altamira and other parts of Uco Valley lost between 80% and 100% of their vineyards.

‘We fought for three nights in a row with burners in our vineyards in Los Chacayes and Maipu, so there is probably 10% of damage but we will have to wait and see.’

Many others were less fortunate as the frost was unexpected. It comes after Mendoza producers have been grappling with severe drought this year, which means less water has been available to irrigate vineyards – one of the methods producers employ to reduce the impact of frost.

‘The frost came out of the blue,’ Solano Pena-Lenzi, CEO of Hispamerchants, a distributor of Argentinian fine wines in the UK, told Decanter.

‘Normally, there are frost forecasts; producers can reduce the impact of frost with irrigation and fires, but what was different this year, was that the frost was not anticipated.’

Pena-Lenzi has been communicating this week with the 10 Argentinian producers he works with. ‘Producers are assessing the damage and do not want to communicate the extent of the damage yet,’ Pena-Lenzi said.

Reports in Argentina have said the frost outbreak was the worst the country has faced in 30 years.

Juanfa Suarez, producer and owner of Finca Suarez in Paraja Altamira, Uco Valley, Mendoza, said: ‘We have had 100% damage to our Finca Las Piedras vineyard and 80% damage at Finca Perico vineyard. I’m really worried about next year and the near future because there’s no material to prune and this can damage the plant’s balance.

‘For small terroir-driven producers it’s a real disaster. We don’t have any white grapes and we’ll harvest just a tiny amount of red. Finca Suarez will only be able to produce bottles for two to three cuvées out of eight,’ Suarez said.

Estela Perinetti winemaker at Las Estelas has reported the strong impact of frost in the Uco Valley’s Lujan de Cuyo and most regions of Mendoza, however she said the area of El Peral where her Finca Mangato is located was not badly affected due to slopes and higher temperatures.

Meanwhile speaking about Patagonia, Solano Pena Lenzi, CEO of Hispamerchants said: ‘The frost in Patagonia, which started around 10pm lasted much longer than usual, which made it harder for producers to fight against. Temperatures in Patagonia (-1°C and -2°C) did not fall as low as elsewhere, but the frost endured much longer.’


Source : https://www.decanter.com/wine-news/freak-frost-mendoza-vineyards-argentina-491310/
Share
Previous Daily Wine News: Future Forward
Next How to Stock Your Cellar: Which Wines, What Budget?