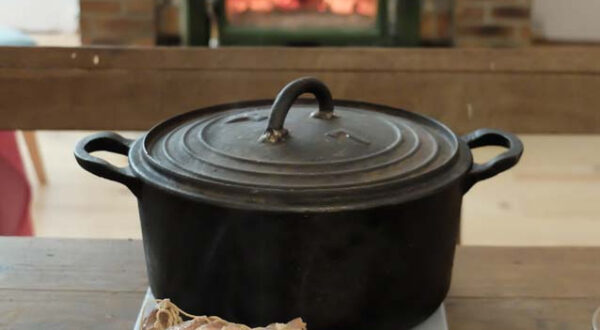 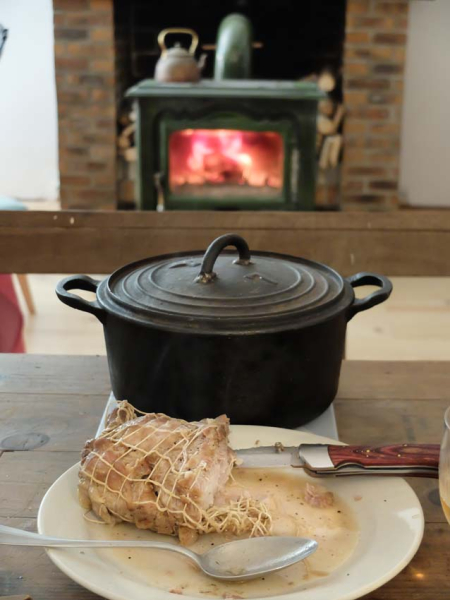 This is autumn and we’re in the middle of troubled times with rising prices including for everything related to food, but there’s still room for indulging in tasty meat dishes like the one I’m going to tell you about. Energy is also getting a subject we’re getting told to worry, and good cooking often often needs to be long. You know I’ve been a longtime fan of everything off-the-grid and these days are the good time to experiment in this direction if you’re still on the mainstream consumer side : all you need is a good old stove upon which you can sit a pan or a pot. 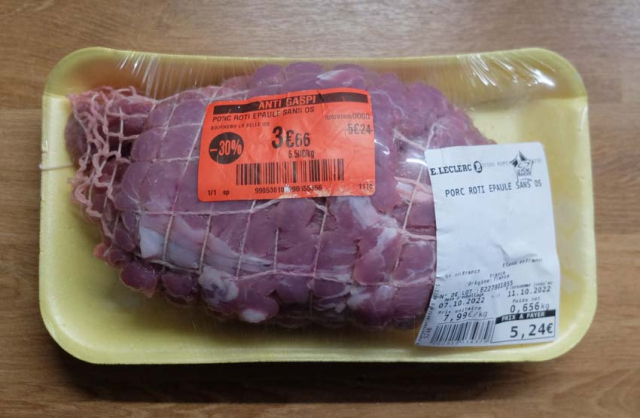 Speaking of food prices meat prices have also become much higher and it annoys me because I’m definetely a meat lover and particularly a red-meat lover (I know I shouldn’t brag about it, it’s become politically uncorrect to love meat, and even worse for red meat, but I’m unrepentant…) but I’ll make a concession because of these prices, drop my targetted beef and I chose instead for this story one of these packaged items the supermarkets sell discount because expiration date getting close. How about this rôti de porc without bones for only 3.66 € ? I’m for it ! They like to label these discounted items “anti gaspi” for “anti gaspillage” which in French means anti waste, but that’s only to sugar coat the buyer into making him feel he’s an eco-minded citizen “saving the planet” when in fact we’re only looking for a bargain at the cost of getting a borderline expired product… 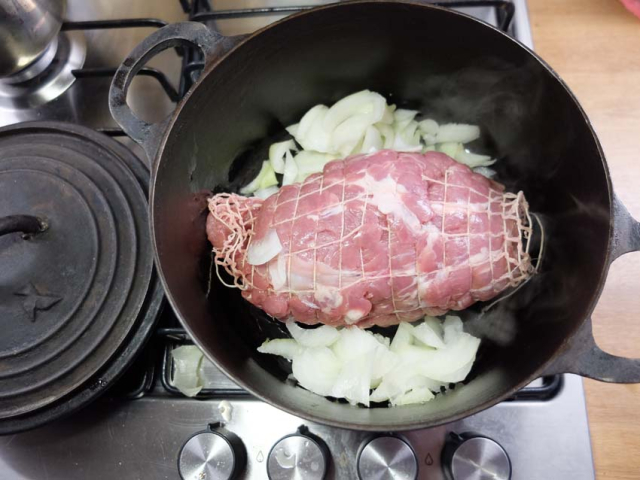 Now let’s rediscover the cast iron pot with it’s samely heavy lid : this is the old secret of slow, long cooking of our ancestors and it works fine today just the same…. I started the cooking on the gas by roasting the rôti all around, with just a bit of cooking oil and sliced onion. You turn the rôti until all the sides are gently brown. 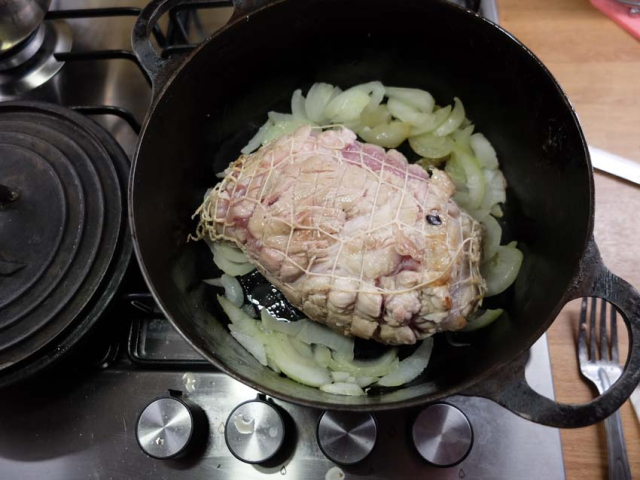 The rôti gets browned after a few minutes 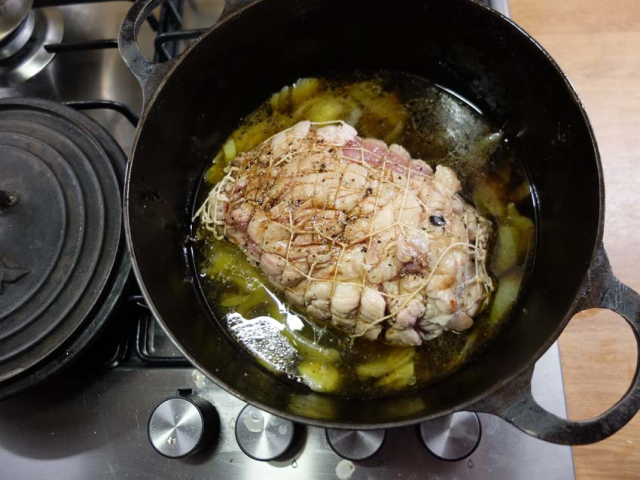 After it’s getting browned (don’t hesitate to do it more than I did, it’ll improve the meat’s taste, which is needed especially that we’re shamelessly using industrial meat here) you add some water in the pot, not too much, about enough so the the rôti bakes half in it, you’ll turn the meat from time to time anyway. 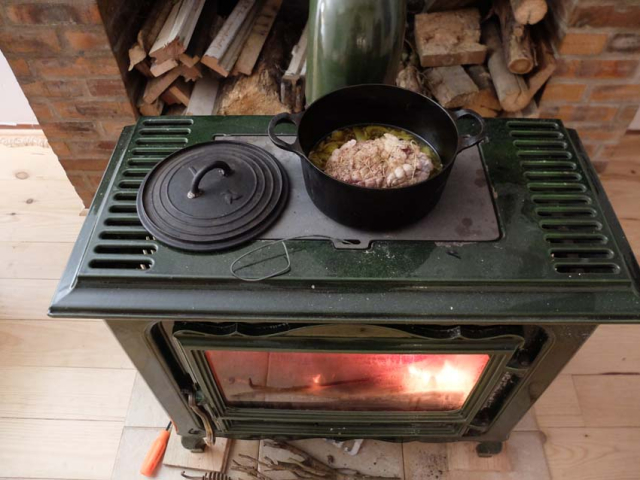 That’s the time to put the iron cast pot on the stove and forget it a few hours (put the lid on, of course), except for an occasional check and turning the rôti on itself so that the cooking is even. I could have started using the stove from the start by the way. If you feel the water is boiling too violently in the pot, just push it on the side of the stove where the temperature is somehow lower, the idea is to get a long, slow cooking. Adding some Provence herbs and laurel leaves is appropriate at this time. You may also add some vegetables at then end as well. 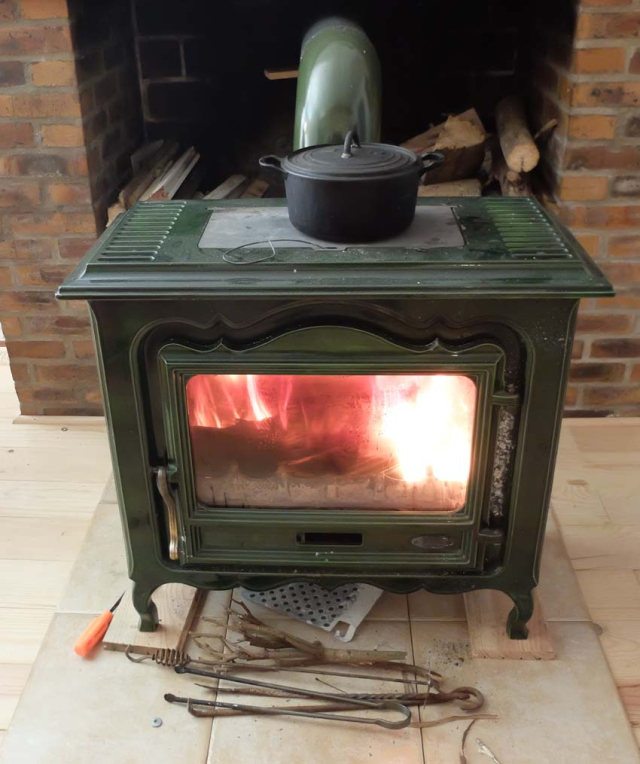 The long cooking will be gentle if you keep the heavy lid tightly on the pot, these pots and their lids are designed precisely to keep the fumes, vapors and humidity in, baking the meat (even the non-immerged part of the meat gets its fair cooking). 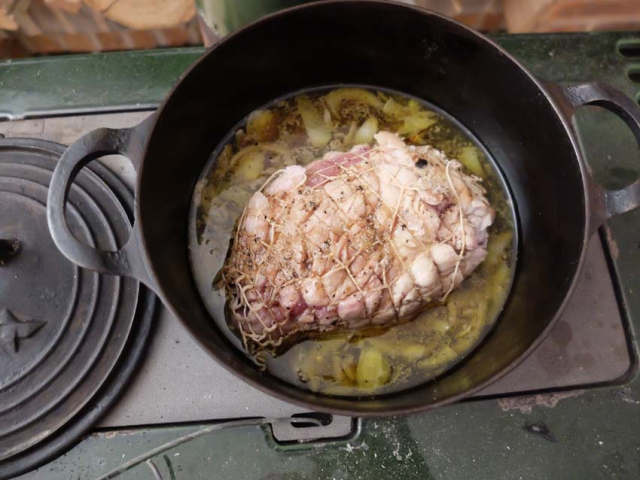 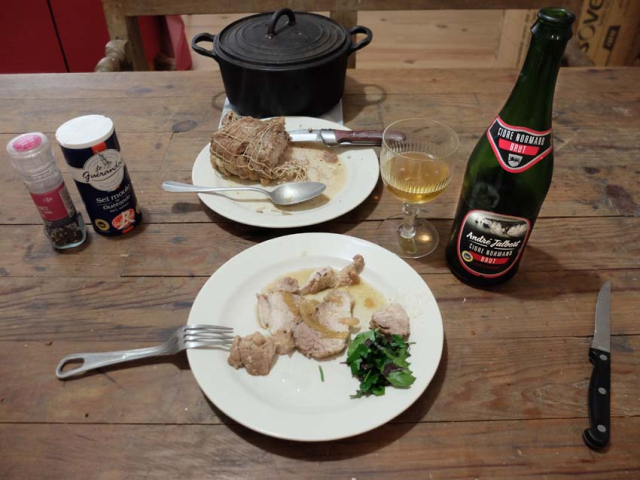 After a few hours, it can be 2 hours, 3 hours or more (as long as you check the water/juice level in the pot and keep the boiling low), you can treat yourself with this humble-in-price but rewarding dish. You can add a bit of salt during the cooking but leave room for adding a bit more at serving, same for pepper. If you love Sichuan pepper like me [in my opinion unproperly named pepper by the way, as this spice tastes more like crispy mint] you can sprinkle some on your plate. Enjoy !

For the pairing I chose another working class alternative in terms of price in these inflation times, with a dry cider [Brut] as this beverage both pairs pretty well with pork and is so affordable (around 2 € if I…