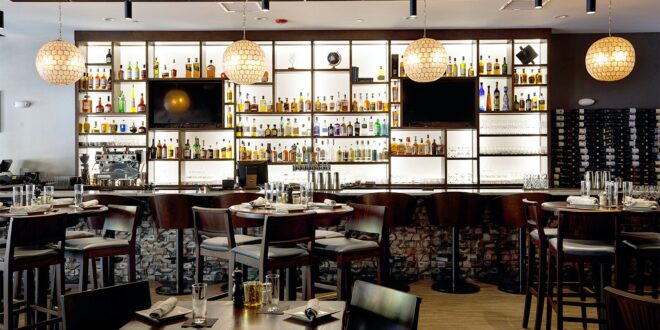 Wine Dive + Kitchen, a Best Award of Excellence–winning restaurant group with locations in Wichita and Manhattan, Kan., opened a new location in early September in Lawrence, home of the University of Kansas. At the same time, the Wichita restaurant was renovated to include a wine cellar, a private dining space and a new bar.

“We’ve always had Lawrence in our sights,” says sommelier and co-owner Brad Steven. “I went to school there, and it’s very close to Kansas City … we wanted to get a little farther north to reach new customers.”

The Massachusetts Street location they found was a lucky steal, according to Steven. The pedestrian-friendly area is rife with innovative small independent shops, restaurants, bars and coffee shops. Steven was also drawn to Lawrence because of how forward-thinking the surrounding businesses are, with a “Kansas City influence.” He said he’s more likely to find unique, “natural” wines like pét-nats and skin-contact orange bottlings, and he believes the city has a thriving consumer base for them.

“We felt with our model, we could slide in there and have something for everyone,” says Steven. “We could still sell all the cool geeky stuff we love. But we could also have those higher Napa Cabernets for when the parents come and visit their kids in school and want to buy a nice bottle.”

The new spot features a wine list of more than 350 bottles, each of which will be featured in depth on Wine Dive’s new iPad system, which Steven says helps immensely with the approachability of his program. Each wine on the by-the-glass list can either be served as a full glass or as a taste, and the bottle list is organized by aroma and body rather than region to give customers the language to find what they want. The food menu will offer a vibrant mix of elevated regional American dishes, like fried deviled eggs topped with crisped prosciutto, blackberry serrano crusted braised bacon and Key West coconut shrimp.

Steven tried to align the opening of this restaurant with the slow period before the KU basketball season. Something he couldn’t predict, however, was the sudden winning streak of the university football team—notoriously down on their luck. “We decided we’d open up during football season; we weren’t going to be very busy—no people are super-excited about football,” remarked Steven. “Then all of a sudden they’re winning, we need to staff up and be ready to be busy!”—J.L.

Seattle-area diners were surprised to learn in June that chef Bobby Moore was leaving his post at Wine Spectator Best of Award of Excellence winner Barking Frog in Woodinville after 20 years. But Moore had already planned his next steps: taking over at Bellevue’s Bis on Main and inhabiting a shuttered bar two doors down for a seafood-focused cocktail lounge dubbed Bar Moore.

Longtime Bis on Main owner Joe Vilardi officially handed the toque to Moore on Oct. 2. “People were worried their neighborhood restaurant was going to fade away, but when they found out I was taking over, they were excited,” said Moore, noting that he’s going to be careful not to change everything at once. “The key word is ‘evolve.’ We need to evolve and build on this. We’ll honor traditions and things built there but put our own twist on things.” For example, Bis on Main’s popular crispy garlic chicken has been tweaked to focus on seasonal and local ingredients. And new menu items, such as Penn Cove mussels with spicy coppa and coconut curry sauce, will…