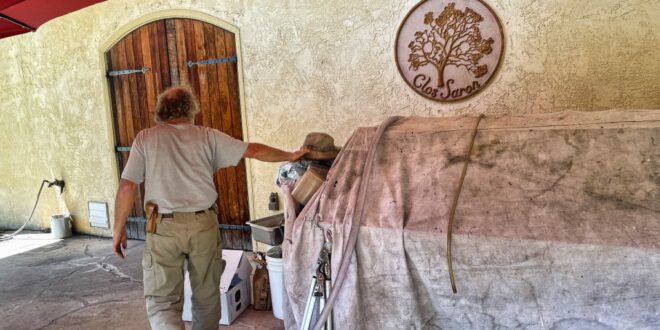 The Way of Granite: Gideon Bienstock and the Wines of Clos Saron

In the most famous wine regions of the world, a tourist wandering the nicely manicured rows of vines that lead up to the front lawn of a gorgeous winery becomes easily lulled into the romantic fantasy of Wine Country.

In Wine Country, life is good. The view is awesome, the people are beautiful, the food is gourmet, and the wine represents a synergetic artistry—the apotheosis of terroir expression and human craft practiced with exacting detail.

Sometimes, the reality of Wine Country actually comes pretty close to that. This makes it all the more difficult to remember that growing and making wine is a precarious dance done with an unreliable and sometimes entirely unforgiving partner, Mother Nature.

As our current age of climate chaos unfurls, the relationship between winegrowers and the natural world can feel more like a battle these days than a dance.

“It was like a scene from some disaster movie,” says Gideon Bienstock with tears in his eyes recalling the events of several months prior. “We were in a state of complete shock. Fully traumatized. I cried my heart out, and for a few days we were not coherent.”

On April 11, 2022 a severe windstorm swept through the Sierra Foothills of northern Yuba County where Bienstock and his wife farm a few scattered acres of grapes on thin decomposed granite soils amidst spruce, pine, and live oaks at 1500 feet of elevation.

Frost has long been an issue for Bienstock, who farms in a water-poor and fire-prone area of California, eliminating both sprinklers and smudge pots as options for fighting frost. This year, his approach involved wrapping the fruit zone of his newly budding vines with polypropylene fabric in the hopes of creating a warmer air pocket on cold nights.

When the windstorm hit, 40-mile-per-hour winds grabbed this fabric and ripped it partially free, leaving it to swipe and slam its way up and down the tender young growth of Bienstock’s vines.

“It was chaos,” remembers Bienstock. “We were out in the vineyards trying to put this fabric back, and you could watch it scraping all the new buds off, whatever new growth there was on the vine. And then it started to break the trellising.”

Bienstock and his wife frantically worked all afternoon and late into the evening to secure the fabric, but even as they did so, they could feel the temperature dropping precipitously.

“It was a total disaster even before the frost,” says Bienstock, “But by the time we finished getting the fabric back on in the dark, you could already tell there was frost damage beginning. You could take one look and tell it was fucked.”

The next morning, Bienstock and his wife emerged to find utter devastation—a total loss to frost across the entirety of their acreage, including all 1000 of the vines that they had just painstakingly replanted a few months earlier.

“Any tiny bit of plant that was trying to come back at that point was re-fried,” says Bienstock, shaking his head. “This year we have literally zero fruit. We can’t even make a quarter of a barrel of wine.”

Bienstock buys some of his fruit from fellow growers in the area, not all of whom suffered total devastation as he did. However, their losses ranged from 25% to 50% of their crop, which means they will not have fruit to sell to Bienstock this year.

“How do you start from zero?” asks Bienstock, shaking his head. “We don’t know where to begin.”

The Wine Sage of Yuba County

Perpetually wild-haired and bright-eyed with a ready smile, Gideon Bienstock may be the best California winemaker that most serious wine lovers have never heard of. His obscurity ultimately has less to do with any desire on his part to remain…