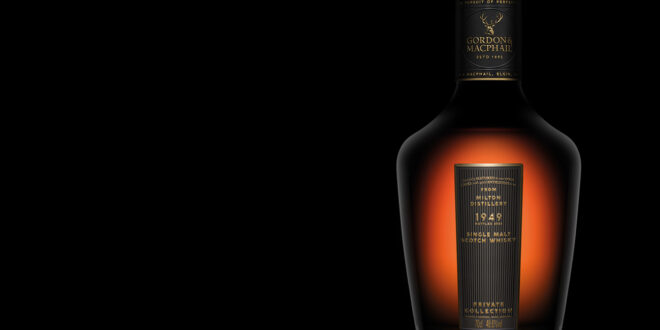 Gordon & MacPhail has released what is believed to be the only remaining cask of Milton single malt Scotch. Milton was the previous incarnation of the Strathisla distillery (in Keith, northeast Scotland), which changed ownership – and its name – back in 1951.

The 72-year-old whisky has been released as part of the G&M Private Collection – a series of extremely rare or long-aged single malts. It has been matured in a first-fill Sherry puncheon cask for its entire life, yielding just 180 bottles, before being bottled at its natural cask strength of 48.6%.

This rare whisky is incredibly rich, with earthy aromas, leading into dark chocolate, crystallised ginger, toasted coconut, espresso coffee and a hint of smoke. The palate has charred orange, ripe cherries and a complex swathe of toasted oak smoke.

Ewen Mackintosh, managing director of Gordon & MacPhail, commented: ‘Having carefully assessed its progress down the decades, we feel now is finally the right moment to reveal this landmark whisky to enthusiasts and collectors. A G&M whisky of this age, bearing the Milton name, will never be seen again.’

Also known as jenever or Dutch gin, this juniper-flavoured spirit comes from the Netherlands. It was a forerunner of gin, which was developed by the British, but there are key differences between the two. While gin can be made from any raw material, genever is always based on grains, such as barley, corn or rye. In this way it’s like whisky, which explains why the taste is often described as a cross between whisky and gin. While gin can be produced anywhere in the world, genever can only be made in specific places: Holland, Belgium and parts of France and Germany.

What to drink now… French Martini

A modern classic, the French Martini was invented in the 1980s at Keith McNally’s bars in New York. In 1996 it appeared on the menu at McNally’s Balthazar in SoHo and was quickly adopted in London style bars such as the Met Bar, then around the world. Not technically a Martini at all, it’s a fruity mix of vodka, pineapple juice and Chambord black raspberry liqueur. To keep your drink a? la franc?aise, use a French vodka: Grey Goose (Alc 40%, £39/70cl Widely available) is a versatile premium vodka from the Cognac region, with spiciness to balance the fruitiness of this drink.

Method: Shake all of the ingredients with ice until your hands are cold. Strain into a Martini glass and garnish.