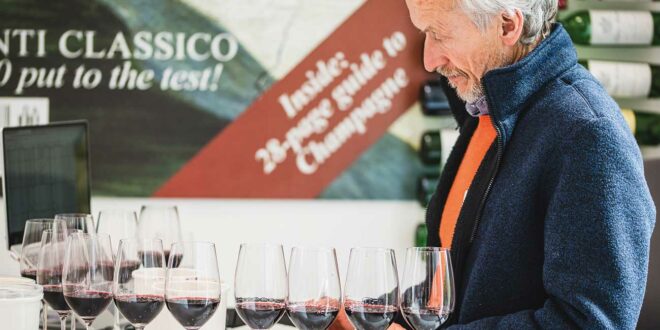 Andrew Jefford: ‘I urge every reader to enjoy wine thoughtfully’

I first contributed to Decanter back in November 1988; the hundreds of columns and articles I’ve written since constitute a journey of discovery. I squirm, though, if I’m described as a ‘wine expert’. Whatever wine knowledge we acquire quickly cools, congeals and crusts over, like custard or gravy, as the years pass. The wine world expands at a clip. Every vintage rewrites history.

It’s the chance to share discoveries – not just about wines, but about people, places and the act of drinking itself – which makes work in this field such a privilege. The Académie du Vin Library is publishing a collection of my writings on wine (many of them originally written for Decanter or ‘Jefford on Monday’ on decanter.com, though all have been revised) in September: the book is called Drinking with the Valkyries. It’s my book of discoveries.

It’s not scholarship, nor a reference tome; it won’t get you through your WSET Diploma, help stock your cellar or land you a job in Beaune. The book is about feeling, tasting and describing the beauty of wine, as well as understanding the intensity of emotion that wine can engender. Thirty-four years on, those are the things that mean the most to me.

I began as an imposter, writing an introductory book on Port without ever having had the chance even to visit Portugal. It was that book which opened the Decanter door – and many others, since I quickly learned (by contacting Port producers, including the thoughtful and intuitive 23-year-old Dirk Niepoort, the charming, courteous Cristiano van Zeller and wise elder statesman Michael Symington) that the wine world liked nothing more than to tell its stories. I leapt at the chance to tell these stories for a living, and was soon off and about, discovering as voraciously as I could.

The timing was fortunate: the pace of wine change will surely never be as frenzied as it was between 1990 and 2020. When I arrived at the then 13-year-old Decanter, its remit was European classics; by the time I began my column for the magazine a decade later, what was called the ‘New World’ was firmly in the ascendant. This was a time of blithe innocence: flying winemakers such as Hugh Ryman and Jacques and François Lurton raced like swifts about the skies. We chased after them, without ever realising that the tonnes of carbon dioxide we deposited in the process might, a couple of decades later, pose problems.

What those winemakers brought was literacy and confidence, not formulae and rigidity; they enabled many of the hidden, overlooked or nascent places in the wine world to find their voice, and step into prominence. They soon rendered themselves superfluous: job done.

Having been Old World and then New World, Decanter has now settled down into being One World: much of the running over the past few years has been made by countries like Georgia, Greece, Croatia and Slovenia, as long-forgotten varieties and traditions assume a new, contemporary importance. Germany and Austria are changed utterly; Italy, Spain and Portugal walk tall with France; the post-Parker era in the fine-wine world brings a new plurality of aesthetic approaches in Bordeaux, Napa and elsewhere; Burgundy’s apotheosis has come, with alarming showers of gold; while Australia, New Zealand, Argentina and Chile apply themselves more seriously than ever before to the grown-up challenges of making true wines of place. No single individual can track even a fraction of this change, which is why it’s our group work as a press cohort which matters more than any individual byline. My respect for my knowledge-gathering colleagues grows with every year, and I salute those younger writers prepared to take up the wine discovery challenge with energy and imagination.

Place forms the core of wine’s beauty, leaving its quiet print on every wine, even the most modest… though never more memorably than when distinguished sites and well-adapted varieties combine with…