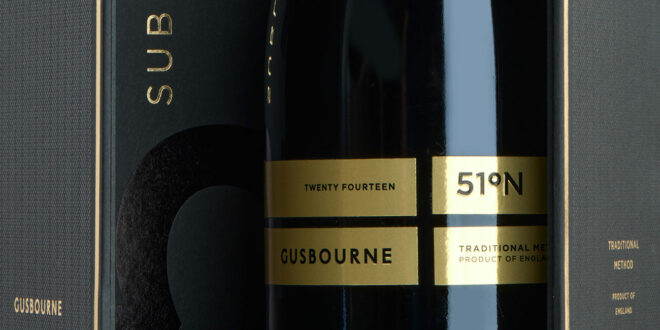 Gusbourne has launched Fifty One Degrees North English sparkling wine from the 2014 vintage at £195 per bottle, which is thought to make it the most expensive so far released.

Some others aren’t too far behind – Nyetimber’s 1086 rosé 2010 is £175 – yet Gusbourne’s move reinforces a sense of ambition within the UK wine world to be a regular fixture at this prestige cuvée level.

Fifty One Degrees North, named after the position of Gusbourne’s vineyards in Kent and West Sussex, is a blend of two-thirds Chardonnay and one-third Pinot Noir, and was aged 80 months on lees. It reflects eight years of tasting and monitoring behind the scenes, according to chief winemaker Charlie Holland.

‘It’s great to finally talk about it with people,’ he told Decanter. ‘There are no shortcuts to any of this.’

Just under 4,000 bottles of the 2014 edition have been produced and the winery does not intend to release the wine in every vintage.

‘We want this to be the best winemaking we can do,’ said Holland, who was about to begin his 10th harvest at Gusbourne, with picking set to begin on 18 September this year.

‘Everything that goes into this wine is the best of what we can do, the best part of the fruit, the purest juice coming out of the press and afterwards, when you come to blending, the most expressive components.’

He described Fifty One Degrees North as a gastronomic wine, capable of standing up to a range of flavours at the dinner table.

He said this partly reflects Gusbourne’s character. ‘In terms of the English wine scene, we’re quite often seen as being on the riper end of the spectrum, largely I think because of our clay soils,’ he said.

Commenting on the new cuvée blend, he said: ‘Generally the Chardonnay, it does have that lovely freshness and structure and backbone, but the stuff we have on the clay, in particular, really has this lovely mouthfeel and texture and weight. When we were looking at this wine, those were key descriptors we were trying to identify.’

The blend could change on future releases, although Holland said it broadly reflected Gusbourne’s vineyard make-up of 50% Chardonnay, 40% Pinot Noir and 10% Pinot Meunier.

He said it was too early to confirm which other vintages could see a Fifty One Degrees North release. He said there would be a focus on warmer, riper years, but it’s a waiting game to see which make the grade.

He believes the launch reflects a broader ‘coming of age’ for UK wine. ‘There’s a certain amount of ambition we’re putting into this,’ he said. Comparisons to prestige cuvée Champagne are perhaps inevitable, but he believes the wider UK industry is developing a greater sense of its own identity.

‘We’re at this inflection point,’ he said. ‘People know the quality’s great, [so] how far can we go?’

On Fifty One Degrees North, he added: ‘We do a huge amount of benchmarking with this wine, against other prestige cuvées from around the world and obviously just over the [English] Channel.

‘We tasted extensively and did blind tastings and essentially showed it to lots of people under a different guise before we released it, so that we were super confident about it.’