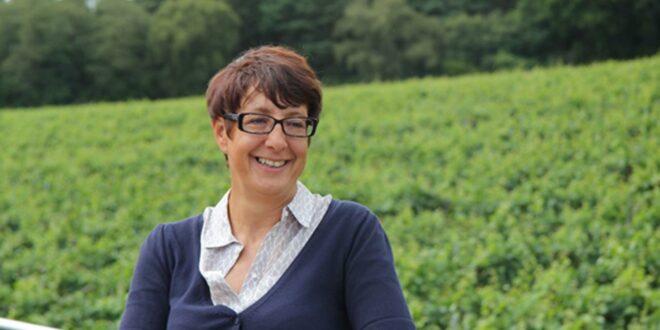 A drink with… Sam Linter

Sam Linter is winemaker at Bolney Wine Estate, the Sussex winery founded by her parents, Janet and Rodney Pratt, which celebrates its 50th anniversary this year. Her daughter Charlotte Linter has followed Sam into the family business as tourism manager. Sam is also the current chair of WineGB.

‘Nobody really knew what they were doing in the late 60s and early 70s in the UK. And we just had this massive learning curve. I remember it being really really challenging to grow good quality grapes in the UK at that time. We didn’t know anything about canopy management, didn’t know anything about the soils to plant on, vine spacings, what we were doing with any kind of vine husbandry.’

‘I did not want to follow my parents into wine! When I got to secondary school, and I started saying that my parents had got a vineyard, I was laughed out of town. And to be honest, in the 70s and 80s we did make a couple of really good wines – they won a silver medal in the International Wine & Spirits Competition – but the rest of the wines being made in the UK at that time just weren’t that good. And you’re thinking I don’t really want to drink this wine. It’s not really that nice. And Mum and Dad are working really hard at trying to sell it, but nobody wants to buy it. And why would I want to work here?’

‘My parents sent me off to do an apprenticeship and the first one I could find was hairdressing. But I really hated it, so I retrained quite quickly to teach hairdressing instead. But then I was pregnant with my son, and my mum was going through quite a bad time and she said: “Can you come and work with us?” So that’s what I did. That was the mid 1990s and I went from there.’

‘I think it’s great that my daughter has followed me into the business, because you’ve got that continuation of the family and the generations, which I really love. But I’ve always said that we should never expect it. People should go into the business because they really want to and they love it, not because it’s an expectation.’

‘We call the people that work here the extended Bolney family. They’re very loyal. They’re very passionate. But your actual family go above and beyond, don’t they? When times are really hard, or there’s something that has to be done, then you can rely on your family to be there and to dig in and get it done.’

‘A family business becomes a lifestyle as well. It’s not just a nine to five job. So it becomes a bit of a passion, where you’re thinking about it, and talking about work outside of work, and working outside of work as well, when you run your own business.’

‘The climate has changed [since the 1970s]. We used to have very early finishes to the summer, now the summer goes on longer and longer – sometimes it will still be warm and relatively sunny in early November, which is just crazy. Whereas you got a sharp finish at some point in September. But also you’d have a later start. Now spring is happening earlier. And that’s quite scary. So it’s giving us that much longer period for growth for the vine.’

‘This year we should be harvesting potentially two weeks earlier, but that gives the potential two weeks hangtime which we wouldn’t normally have had. So that’s quite exciting, but it brings in some more challenges as well.’

‘When we first started growing vines, you had no frost risk. The vines budded so late that the frost was well and truly over. Whereas now our bud burst is happening right in the middle of the frost season. And it can be pretty bad – we had -7? here in early April and that did some damage to our crop. But they’re not just ground frosts anymore. You’re getting some really…