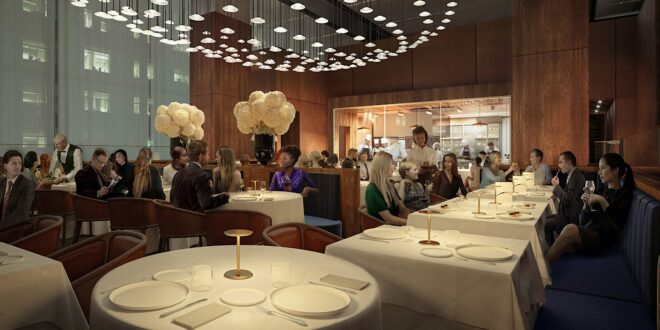 Jean-Georges to Open a Restaurant in New Midtown Manhattan Tower

It looks like Jean-Georges Vongerichten isn’t ready to stop growing his global restaurant empire. Fresh from opening his latest project in lower Manhattan, the dining/retail destination Tin Building, the France-born, New York-based chef and restaurateur announced in August that he would open a restaurant in L&L Holding Company’s new 47-story office building at 425 Park Avenue. Set to debut toward the end of 2023, this new establishment’s name has not yet been announced, but it will join a group of restaurants that includes Wine Spectator Award of Excellence winner Jean-Georges in Philadelphia, Best of Award of Excellence–winning the Mark Restaurant by Jean-Georges and Vongerichten’s namesake flagship in New York, which has held a Grand Award for its wine list since 2016.

As with the rest of the block-long 425 Park Avenue, the restaurant has been designed by British architect Lord Norman Foster and his Foster + Partners firm. The main dining room is on a mezzanine level with 25-foot-high ceilings and a 1,000-square-foot open kitchen. Below, on the ground floor, will be a cocktail lounge with 45-foot-high ceilings and a piece from abstract painter Larry Poons. There will also be an on-site bakery and a private dining room with a separate kitchen.

“I have known Jean-Georges as a friend and have marveled at his cuisine for over 20 years,” said L&L chairman and CEO David Levinson in a statement. “I had always hoped I could one day partner with him on a New York City restaurant and am delighted this opportunity came together.”

Vongerichten will also be overseeing food and beverage in the building’s Diagrid Club, a tenant amenity and wellness center with Central Park views, outdoor areas, private meditation rooms and an installation from Japanese artist Yayoi Kusama, who has also worked with Veuve Clicquot.

Under construction since 2016 and in the works for far longer, 425 Park Avenue has been designed to meet international standards for energy-efficient buildings and healthy workplaces. “The building is situated across the street from my first job in NYC in 1986, so it almost feels full circle,” said Vongerichten in a statement. “Between the menu and design of the tower and restaurants, this is going to be the healthiest building in [New York City], in all senses of the word.”

There’s no word yet on what the beverage program will look like at Vongerichten’s new restaurant. But, if the chef’s past endeavors are any indication, it seems very likely that wine fans will have a lot to look forward to.—C.D.

Shocking the restaurant world, chef David Kinch announced in late August that he will be departing his acclaimed Manresa restaurant in Silicon Valley. What’s more, Kinch plans to sell the Los Gatos, Calif., property after what will be the Wine Spectator Best of Award of Excellence winner’s final service on Dec. 31, 2022.

“For the past 20 years, Manresa has essentially been my whole life. And like all passion projects, it has been more challenging and more rewarding than I could have imagined,” Kinch said in a statement.

Since opening in 2002, Manresa has been delighting customers with Kinch’s innovative twist…