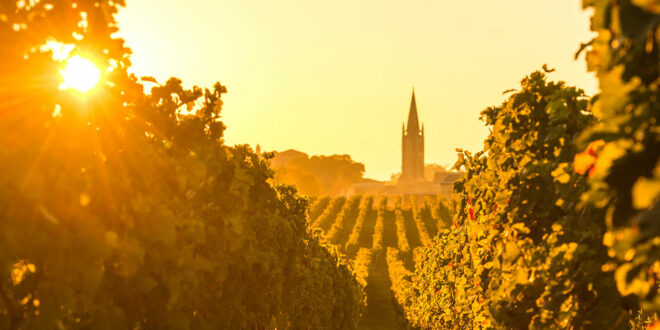 A ‘very promising’ vintage is expected, said the regional wine council (CIVB), as the Bordeaux 2022 harvest gets underway for reds.

It’s still too early to judge fully and yields will be lower in some cases following heat, drought and also hailstorms during the growing season, yet the CIVB cited ‘attractive but small berries’ and healthy vineyard conditions during the crucial flowering period and for harvest.

Europe has seen early starts to wine harvests in 2022 and the CIVB said picking began 15 to 20 days earlier than normal.

Picking for white and sparkling ‘Crémant’ wines began on 16 August, with fruit for rosés coming into cellars from 26 August. For reds, châteaux began bringing in Merlot from the warmest terroirs on 1 September.

‘Rains from mid-August breathed new life into the red grape vines, stimulated in parallel by the alternation of hot days and cool nights,’ said the CIVB.

‘With these ideal conditions for reaching optimum ripeness, the red harvest started calmly at the beginning of September with Merlot, the earliest red grape variety.’

It has been an ‘historic year for the climate’, said the CIVB.

Bordeaux temperatures have been above the 30-year average by one to three degrees Celsius every month since February, it said, as the chart below shows.

Rainfall in Bordeaux has been below the 30-year average in every month of the year so far, apart from June, when fierce hailstorms hit some vineyards on the 20th and 21st, as the chart below shows.

July saw just 3mm of rain in Bordeaux, compared to a three-decade average for the month of 49mm. It was also a particularly sunny month, with 349 cumulative hours of sunshine versus an average of 256 hours.

Exceptional measures allowed producers to irrigate vines in some appellations, including Pomerol.

Producers have previously told Decanter that heat effects were terroir-specific, but drought combined with heatwaves generally led to smaller berries in vineyards, said the CIVB.

‘The water stress observed has had a strong impact on berry size,’ it said. ‘At the same stage of véraison [ripening], the weight was 15 to 30% lower than the previous vintage, and below the average for the last five years.’ The rain in August increased berry size on some sites.

It’s the combination of heat and lack of rainfall that has led to significantly higher water demand from vines in 2022, Gregory Gambetta, professor of viticulture at Bordeaux Sciences Agro and the Bordeaux Institute of Vine and Wine Science (ISVV), told Decanter recently.

This summer also saw large forest fires burning in the Bordeaux region, including in Landiras to the south of the city.

Smoke taint was not expected to be a problem, said a CIVB spokesperson in August, citing several factors, including the distance of many vineyards to the fires and wind direction. ‘Some berries have been analysed and nothing has been detected,’ she said. Wineries from Australia and California contacted the CIVB in July to offer expertise.

France expects bigger 2022 harvest but drought is a concern