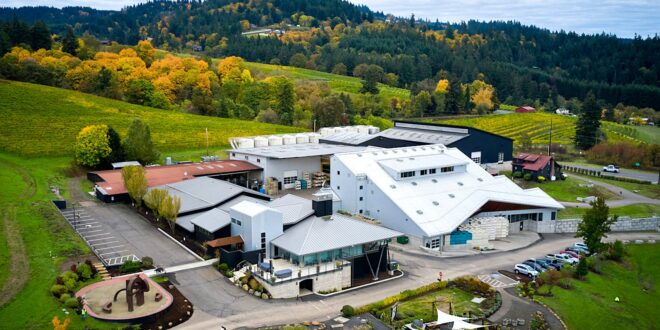 The sale, which closed today, includes the A to Z and Rex Hill brands, inventory and the Newberg winery facility. The purchase price was not disclosed. “Erath and A to Z share the same passion for producing high-quality wines at fair prices, making A to Z a natural fit for Ste. Michelle,” SMWE president and CEO David Dearie said in a statement.

A to Z Wineworks was founded in 2002 primarily as a négociant by four Oregon wine industry veterans: Deb Hatcher of Eyrie, Bill Hatcher of Domaine Drouhin Oregon, Sam Tannahill of Archery Summit and Cheryl Francis of Chehalem. “Ste. Michelle understands the Pacific Northwest better than anyone, and they know what it takes to promote an entire region on the global stage,” Deb Hatcher told Wine Spectator.

While Bill Hatcher is retiring as the chairman of the A to Z board, the other three founders will join SMWE as consultants. A to Z president and CEO Amy Prosenjak will also join SMWE as president of Oregon brands.

A to Z Wineworks is one of Oregon’s biggest success stories. It produces a wide range of bottlings, including Pinot Noir, Chardonnay, Riesling, Pinot Gris, rosé and sparkling wine, all generally selling for $25 per bottle or less. Despite a rapid increase in production from 100,000 cases annually in 2006 to nearly 400,000 in 2022, the wines continue to offer good quality at a fair price.

Founded by Paul Hart and Jan Jacobsen in 1983, Rex Hill was sold to A to Z in 2006. A to Z was outgrowing its custom crush space and needed a new home. An additional winemaking facility was built in recent years.

SMWE’s origins date to 1934. It has a sizeable stable of wines, from the flagship Chateau Ste. Michelle, to Columbia Crest, 14 Hands and Col Solare. The company has been increasingly investing outside Washington state, purchasing Erath in Oregon in 2006, and California wineries Stag’s Leap Wine Cellars in 2007 (in a partnership with Marchesi Antinori) and Patz & Hall in 2016. SMWE produced 7.3 million cases in 2020.

This is the first acquisition for SMWE under the new ownership of New York–based private equity firm Sycamore Partners, which purchased the company for $1.2 billion in late 2021.