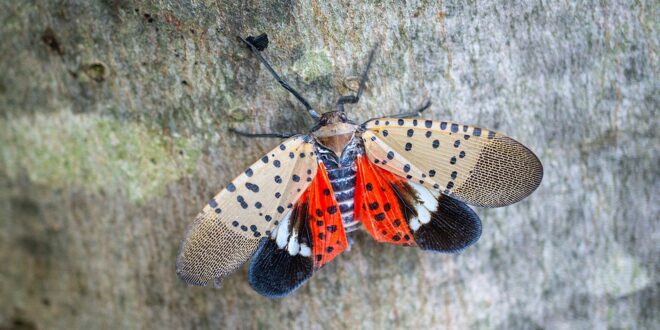 Eight years after it was discovered in the United States in a pile of rocks intended for landscaping in a backyard garden in Pennsylvania, the spotted lanternfly, a moth-like insect from southern China, has spread to 12 additional states. That has vintners in the Eastern U.S. dealing with damage to vines and looking for a solution. It also has West Coast vintners nervous. One study has projected that the insect will likely reach California by 2027.

Relatively slow travelers but prolific breeders, lanternflies (Lycorma delicatula) quickly spread throughout Pennsylvania, devastating vineyards and causing panic in the state department of agriculture. Technically the lanternfly is neither moth nor fly; it’s a hopper that leaps from plant to plant. It’s big for a bug: 1 inch long and 2 inches wide with its gray and bright red wings extended. They travel in packs, like locusts.

While the infestation has quietly expanded across the Eastern states, alarming agriculture officials and wine industry members, officials in California are keeping a watchful eye on the bug and laying plans to keep it from taking hold in their state. In February, lanternfly egg masses were intercepted at a CDFA agricultural checkpoint in Truckee, Calif., near Lake Tahoe, on a trailer load of firewood coming from New Jersey, one of the infested states.

The insect doesn’t eat vines. It uses its proboscis to reach the sweet sap inside, drinking its contents and leaving behind sticky waste, euphemistically referred to as “honeydew,” which coats the plant, disrupting photosynthesis and attracting mold. While the insect does not feed on fruit clusters, one winemaker described wine made from grapes on an infested vine as having a “cabbage-y” odor. Lanternflies also threaten trees, including almond, apple, cherry, walnut and pines. At last count, the insect had done upwards of $43 million in agricultural damages, between vineyards, fruit and nut orchards, and lumber forests.

State and federal agriculture departments are warning consumers and industry members to be on the lookout for lanternflies and their egg masses, as human beings and human activity seem to be the main avenues of spreading the insect. Bulletins warn that the lanternfly is somewhat unique in that it likes to lay its eggs on smooth surfaces on cars, RVs, trucks, train cars and even lawnmowers and bikes. People are inadvertently moving eggs from infested regions to new areas.

Officials are asking travelers passing through lanternfly quarantine areas to check their vehicles, trailers and even clothing to avoid accidentally moving insects to uninfested areas.

And what do officials advise if you spot a lanternfly? “Kill ’em! Squash ’em, smash em … just get rid of em,” pleads the Pennsylvania Department of Agriculture on its website. The next best suggestion is to photograph egg masses or insects and notify your local department of agriculture. Pesticides can be effective on lanternflies, however, the bugs tend to lay their egg masses in places that are not easily accessible.

Is there a silver lining here? Don Shump, owner of Philadelphia Bee Co., thinks so. Shump has spent the past 10 years tending bees and harvesting honey from different neighborhoods in Philadelphia. In fall 2019, Shump noticed an unfamiliar aroma coming from one of the processing areas—it smelled like maple bacon.

The honey looked and smelled like nothing he had encountered, and had a surprising smoky flavor. Long story short, Shump and his associates realized they were harvesting honey from bees that had been feeding on lanterfly “honeydew.” Shump’s richly flavored Doom Bloom honey is receiving rave reviews.