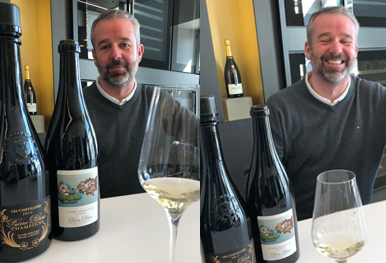 One winery I wanted to be sure to visit when I was in Champagne last month was Pierre Péters. I have always tremendously enjoyed the racy wines in the US and Rodolphe Péters not only commands a lot of respect in the wine world for his Champagnes but I had heard he had a new (sparkling) wine project in California I wanted to learn more about. Despite wanting to find it, I drove right by the winery in Le Mesnil-sur-Oger–there’s no sign and it looked like a construction site.

Rodolphe PÃ©ters, who has made the wine since taking over from his father in 2007, met me and apologized for the mess. He said the project was taking longer than expected (which renovation hasn’t?). Rodolphe is a sixth generation farmer and a fourth generation winemaker. The estate is a renowned producer of blanc de blancs Champagne from their 19.98 hectares, which contain 65 parcels on the thin topsoil and chalky subsoil of the famed Cote des Blancs area. Only his grand cru wines are available in the US market (While he does make wine that is not grand cru, that stays in the French domestic market and the US receives only grand cru wines.

the family business. Instead, he had other jobs in the wine industry, such as selling closures for a big company, an experience that he said made him better at the business side. He also likes to list things, I learned, and he enumerates two things he learned about winemaking in this period of his life:
1. The best terroirs are stronger than the best winemakers, who shouldn’t even think to influence the best terroirs in the cellar
2. There is no recipe. His father once told him that every year is a new canvas. Rodolphe underscores how right he was, particularly with climate change, as conditions change year-to-year even more than before.

â€œIf the best terroirs are very well farmed, if we pay enough attention just before and during the harvest–the key period of the year, more important than vinification–there is nothing much more to do to make champagne.â€

He had a lot more to say about growing and harvesting, and he again enumerated:

1. The balance of maturity. â€œThe magic of champagne is that we were able to pick ripe grapes that are unripe,â€ he said referring to what he called the “golden age” of champagne making that lasted until a couple of years ago. He says that growers in the region were able to pick grapes in perfect condition, which contributed to the increase in quality seen across the region. But things are changing. He says that the warming seasons now mean that sugars can outpace phenological ripeness of the grapes–the season used to take about 100 days from flowering to picking but last year some harvested in only 83. And rains at harvest can be particularly damaging.

“Most people think the quality of a vintage comes from the whole farming season–most actually comes one week before the harvest to the picking. A spring frost, for example, will affect quantity, not quality.â€ Also, he judges when to pick by taste. Sure, there’s a lab test, but he says taste is key.

2. Freshness of the fruit: he has set up a way to get the picked fruit pressed within three hours. “We need to avoid crushing, which would start pre=-maceration. Even for chardonnay. Every extra minute between picking and pressing diminishes freshness.”

3. The press matters. He is a fan of the pneumatic press over traditional He also says that managing the flow of the must–the unfermented juice emanating from the pressed berries–to have it flow through the skins acts as a natural filter which clears the must without the need to filter. To clarify (!) though, he doesn’t want perfectly clear juice since he keeps the wine on the gross lees and these add important flavor components, such as a nutty character, down the road.

4. Regulations limit the amount of juice that can be pressed from the grapes at the…