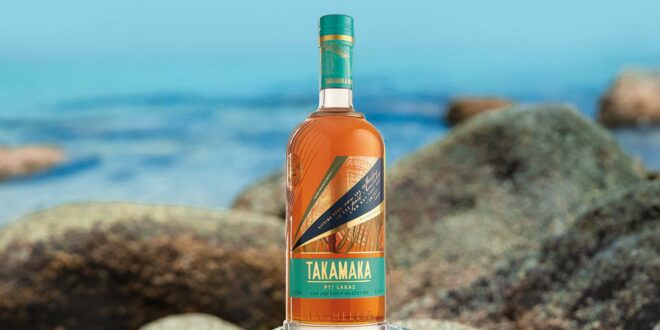 If you’d like to add a touch of the tropics to your drinks cabinet this summer, try the new St Andre? Series rums from Takamaka. Based in the Seychelles, Takamaka is celebrating its 20th anniversary this year with four new releases: Extra Noir, Zepis Kreol, Pti Lakaz and Grankaz. Produced at the Trois Freres distillery on the island of Mahe?, these rums showcase different production techniques, making use of both molasses and cane sugar rums, and pot- and column-distillation, with ageing in a variety of casks. Three of the four include rum from the Foursquare Distillery in Barbados in the blend. Pick of the bunch is Pti Lakaz (Alc 45.1%), two Seychelles rums – a pot-distilled cane rum matured in three types of oak and a molasses rum rested in ex-bourbon casks – with an eight-year-old molasses rum from Foursquare. It kicks off with a nose of spice, toffee and tropical fruit. Rich and rounded, with mellow brown spices, malted milk biscuits, Madeira cake, bananas, caramel and ripe tropical fruit, and a long, spicy finish. Perfect for a fruity rum punch.

What is…the difference between bourbon and Tennessee whiskey?

Both produced in the US (although Tennessee whiskey can only be made in the state of Tennessee), bourbon and Tennessee whiskey are almost identical. Bourbon is defined as a 51% corn-based whiskey, distilled to no more than 80% abv and then aged in new, charred white oak barrels. A Tennessee whiskey, such as Jack Daniel’s, is made in almost exactly the same way – the only difference is that the final spirit is filtered through maple charcoal, which smooths out the whiskey and gives it a more mellow flavour.

What to drink now…Sea Breeze

This fruity summer cocktail has appeared in different guises through the decades. A Sea Breeze Cooler is mentioned in The Savoy Cocktail Book from 1930, where it’s an equal mix of gin and apricot brandy with lemon juice and grenadine, topped with soda. Thanks to the efforts of US producer Ocean Spray, cranberry juice became a popular mixer in the 1950s and 1960s, but it wasn’t until the 1980s, due to the marketing might of Absolut Vodka, that the Sea Breeze became established in its current form. Try making it with Arbikie Tattie Bogle Vodka, a creamy Scottish potato vodka with spice and earthiness to balance the sweet and tart fruit juices (Alc 43%, £36-£39/70cl Arbikie, Master of Malt, The Drink Shop, The Whisky Exchange, Yumbles).

Method: Add all of the ingredients to a highball glass filled with ice and stir gently to mix, then garnish.

The post Distilled – New tropical rums for the summer appeared first on Decanter.