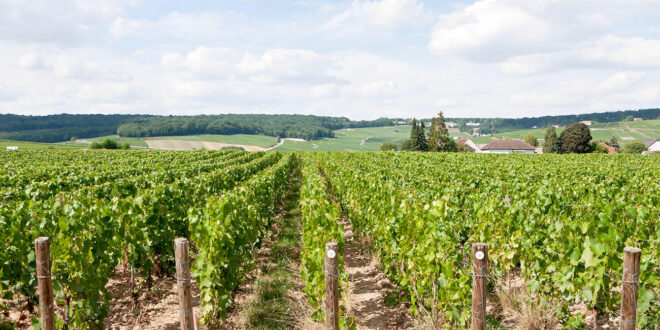 The Champagne 2022 harvest has begun and picking start dates have been set for the majority of villages, the Comité Champagne has announced.

Individual harvest start dates are set for each village and grape variety in the entire Champagne region. This year, dates range between 20 August (Montgueux in the Côte des Blancs) and 6 September (Dormans Soilly in the Vallée de la Marne).

The Réseau Matu, a network of hundreds of vineyard control plots, is used to observe the ripening of grapes across the region and to help decide optimal picking dates for each area and variety.

Dates aren’t prescriptive; producers may choose to harvest after the start date indicated.

Grower-producer Champagne Pouillon, based in Mareuil-sur-Ay and Aÿ, said the team won’t likely start picking until 6 September, despite being able to harvest from the 26 August. ‘We want optimal phenolic and aromatic maturity,’ it said.

A lack of disease pressure and the good health of grapes is ‘encouraging people to be patient,’ said Alice Paillard, of Champagne Bruno Paillard.

Producers can also seek permission to harvest earlier than the official dates set.

Mathieu Roland-Billart, CEO of Billecart-Salmon, said the house requested an earlier harvest date for Chardonnay vineyards in some of its most southern parcels near Vitry-le-François, ‘as the maturity profile in these parcels showed high natural sugar (in excess of 11 degrees) and a fast decreasing acidity.’

Commenting on the harvest start dates across the region, Denis Bunner, deputy cellar master at Champagne Bollinger, said, ‘We expected big differences between the villages, but the closer to the harvest we are, the less differences we see.’

‘Yes, it is an early harvest, but not as much as was anticipated,’ said Paillard.

The start of the picking period is particularly early this year, but it’s not unheard of, and it reflects the observation that harvests are generally starting earlier and earlier as a result of climate change.

Bunner said it is the sixth time that harvest has begun in August in the last 20 years, and Roland-Billecart said this isn’t a particularly novel phenomenon – in 2018 the team started on 20 August, for example.

Charline and Hugo Drappier, of Champagne Drappier, noted that this timing has become the average over the past five years. ‘It is 3 weeks earlier than the typical start date of our father’s time, when harvests never used to start in August.’

What is apparent is that if early harvests like this one are likely to become more frequent, producers will need to be prepared.

Champagne Pouillon said harvest was increasingly beginning earlier; five days earlier compared to their average. ‘In the years to come, we will encounter more and more early vintages to which we will have to adapt,’ said Fabrice Pouillon.

It brings forward the question of what happens to ripeness and the development of flavour in the grapes over an increasingly short growing period.

The quality of the vintage will become more apparent as harvest continues over the next two weeks, but feelings are positive so far.

‘Twenty years after the famous 2002, we are going to have another great vintage,’ said Bunner. ‘Very ripe, well balanced in acidity, and perfectly clean with no disease, on the three grape varieties. We are looking forward to seeing the final result after the fermentations.’

A yield of 12,000kg per hectare was set by the Comité Champagne for the 2022 harvest – the highest in more than a decade.

The Comité attributed this increase to ‘minimal losses from spring frosts and hailstorms and the excellent health of the Champagne vineyard as a whole’.

Roland-Billecart said the growing season has been ideal. ‘We have had very long sunny spells and the ground benefited from water reserves from 2021. We have hardly had any diseases…