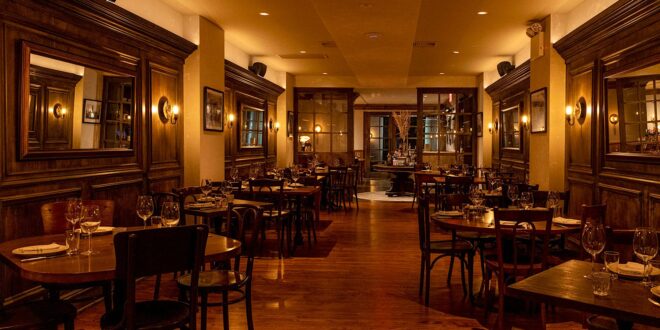 Located in New York’s Greenwich Village, the One Fifth Avenue skyscraper has been home to several memorable Manhattan restaurants, starting with the original One Fifth, a destination for both the building’s co-op residents and local and visiting celebrities. (Keith and Brian McNally worked there before becoming famous restaurateurs in their own right.) Later, there was a 1990s seafood reincarnation from the team behind Gotham Bar & Grill, followed by the Batali & Bastianach–owned Otto Enoteca e Pizzeria, which closed in 2020.

“It’s been a dream of my family to open up a restaurant that can showcase the way the Forgiones eat when we all get together,” Forgione told Wine Spectator via email. “Huge antipasti platters being shared, conversations around a big table, lots of wine.”

Wilson and Sagaria oversee One Fifth’s wine program. The list—interspersed with helpful information on wineries, regions and varieties—features about 350 labels and is focused on Italy, offering everything from Barolos to Amarones to Chiantis to Sicilian reds. California also plays a key role here, with picks like Sonoma Chardonnay, Napa Valley Cabernet Sauvignon and Santa Ynez Syrah, and there is a lengthy selection of Champagne and other sparkling wines. Across the list are noteworthy verticals from leading wineries like Biondi-Santi, Heitz and Silver Oak, to name just a few.

While the program spotlights leading wineries with older vintages, there are also many bottles priced less than $100, helping create a more approachable and lively experience for guests. There are plans to grow the list over time, with continued focus on well-known producers, as well as newer names in Italy and California. One Fifth also offers an extensive by-the-glass list with its own reserve wine section, along with special, rarer bottles poured at the bar. The restaurant will host wine and amaro tastings and wine dinners in the future.

Alongside One Fifth’s wines, Jeff Bell, owner of East Village cocktail bar Please Don’t Tell (the speakeasy-style bar famously located behind the phone booth in Crif Dogs, and another Apres Cru partner), has created a variety of Italian-influenced drinks, including the Gran Torino, a mixture of Sazerac rye, Barolo Chinato and Ratafia di Andorno cherry liqueur.

The team at Brooklyn-based 71 Collective kept history in mind when designing One Fifth, restoring the space’s 1970s terrazzo floors and its revolving door, while mixing traditional Italian elements with Art Deco…