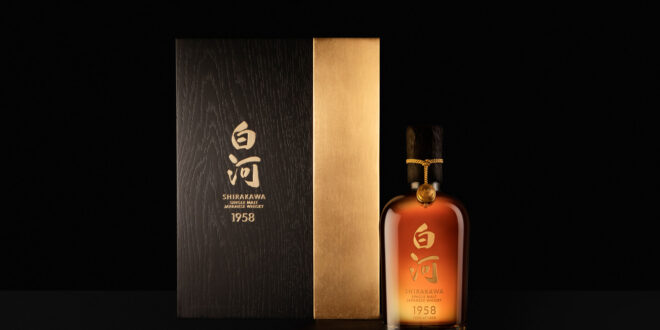 Shirakawa 1958 is the only official single malt bottling from the demolished distillery, and is also said to be the earliest single vintage Japanese whisky bottled to date, although part of its back story remains shrouded in mystery.

The whisky was distilled at the Shirakawa distillery, located 200km north of Tokyo, in 1958, and survived an era when Shirakawa’s malt whisky was almost all used in owner Takara Shuzo’s flagship ‘King’ blend.

Shirakawa was opened in Fukushima Prefecture by previous owner Daikoku Budoshu in 1939, before being acquired by Takara Shuzo in 1947. It only produced malt whisky between 1951 and 1969, and was demolished in 2003.

Little is known of the history of the whisky, which was distilled at a time when Shirakawa mainly used Japanese malted barley and locally sourced ‘mizunara’ oak casks. At some point, it was transferred from oak into ceramic jars at the distillery, then put into stainless steel tanks at Takara Shuzo’s Kyushu factory when Shirakawa closed.

‘There are no known examples of Japanese whisky claiming to be from a single vintage that predate Shirakawa 1958,’ said Stefan van Eycken, a leading authority on Japanese whisky. ‘Even though Shirakawa distillery was one of the pioneers of malt whisky making in Japan, the liquid was never officially available as a single malt.’

The whisky came to light after Stephen Bremner, MD of Scotland-based Tomatin Distillery Co – which is owned by Takara Shuzo – became intrigued by the Japanese company’s early history of malt whisky production. Extensive research led to the identification of the final parcel of Shirakawa single malt in 2019.

From 13 September, 1,500 70cl bottles of Shirakawa 1958, bottled at 49% abv and priced at £25,000 each, will be available from tomatindistillery.com and retailers including Harrods, Berry Bros & Rudd, The Whisky Exchange and Royal Mile Whiskies.

The only UK consumer tasting of Shirakawa 1958 will take place at 12.45pm on Saturday, 1 October 2022, at The Whisky Exchange Whisky Show in London. Tickets will be available from today (24 August) at whiskyshow.com/london/. Guests must also hold a Saturday ticket for the show.

American whiskey becomes most valuable auction sale of its kind

Courvoisier Mizunara: the launch of a collaborative Cognac